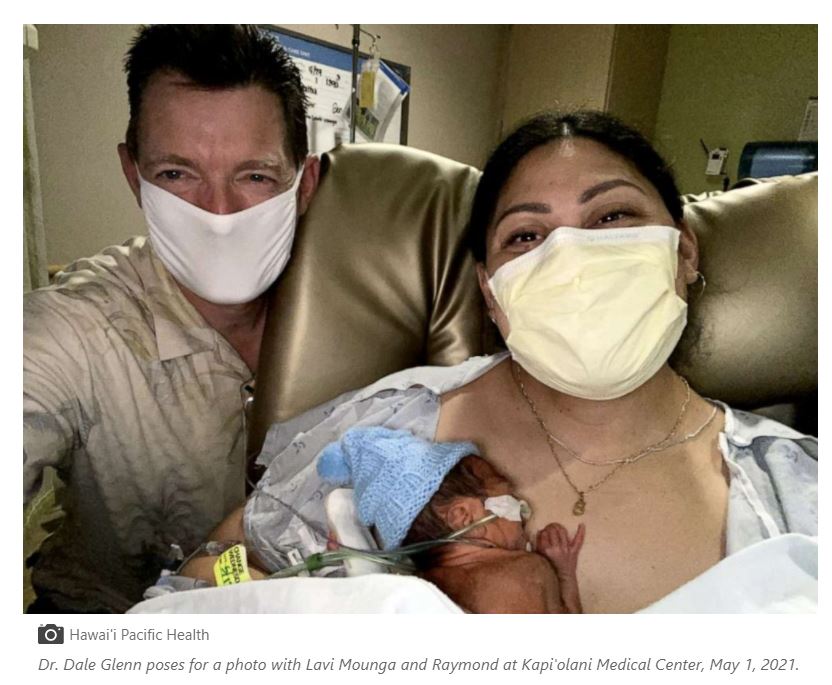 Dr. Dale Glenn poses for a photo with Lavi Mounga and Raymond at Kapi'olani Medical Center, May 1, 2021.

Well, this is one of those birth stories that will be told at Thanksgiving for the rest of this kid’s life.

You sometimes hear about women who don’t know they are pregnant and then rush to the ER with cramps and out comes a baby. TLC even had a hit show several years ago called “I Didn’t Know I Was Pregnant”. Pretty fascinating stuff, especially to mothers who felt every tiny change in her body as the baby was growing. But it happens!

Giving Birth on a Plane

One mom who didn’t know she was pregnant ended up giving birth to her premature baby on a flight from Utah to Hawaii. And get this – there were not one, not two, but three neonatal nurses and a doctor on the flight, who helped her deliver her 29-week-old baby boy.

On April 28, Lavinia “Lavi” Mounga gave birth on the Delta flight, somewhere over the Pacific Ocean, to baby Raymond and the neonatal nurses and doctor cared for her and the baby for three hours until the plane landed, where mom and baby were safely transported to a hospital in Honolulu.

In the ABCNews.com story, North Kansas City Hospital NICU Nurse Lani Bamfield said, “We were about halfway through the flight, and we heard someone call out for medical help. I went to see what was going on and see her there holding a baby in her hands, and it’s little.”

Hawaii Pacific Health family medicine physician Dr. Dale Glenn was the doctor on board and he said he couldn’t believe how lucky Mounga was to have three neonatal nurses on the flight. He also said, that because of the confined space of an airplane and the fact that, well, they weren’t in a hospital, they had to get creative with medical care. They used and Apple Watch to monitor baby Raymond’s heartrate and shoelaces to cut the umbilical cord.

Mom and baby are doing well. Little Raymond will remain in the NICU until he’s ready to go home. But what a birth story he’s got!

Parents shared their best hacks and we need to try these