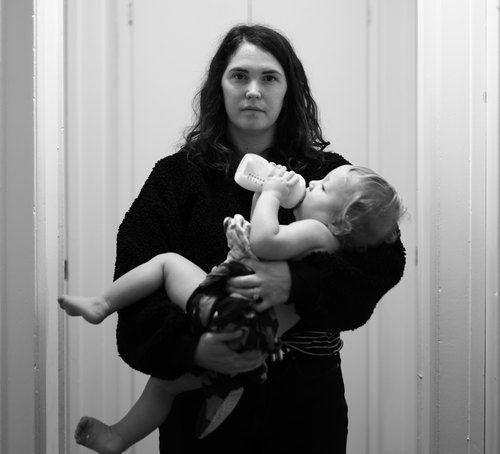 Have you ever lain awake at night with tears streaming down your face, literally ill at the thought that you have to hand over your very newborn child within the next few hours?

And these nights didn’t add up to days, or weeks, or months… but rather years.

Have you ever held your breath at the checkout counter as they scanned your card through, surveying your few items and praying to God your account had enough in it to cover the cost?

And guess what? It has been declined.

Have you ever stood in the window with a baby in your arm and children latched to each leg, watching as your vehicle was taken away?

Yet at that very moment, I knew that I would walk across fires in order to be able to provide for my family and get it back.

And there were times, by the sheer grace of God, I can’t believe we made it and are still here… together.

Have you ever had to quietly sneak into your kids’ rooms to get to their piggy banks in order to try to scrape together enough to buy groceries for the week?

And it very well may have been one of the most heart-wrenching, most humbling moments of my entire life.

Have you ever walked out of your caregiver’s building or day care center and felt as if hundreds of daggers were piercing each part of your body, from head to toe? Knowing behind you were toddlers and babies screaming, reaching with every fiber of their being to get you to walk back through those doors?

And it’s the most significant and severe pain I wouldn’t wish upon any human being who ever walks on this Earth.

Have you ever dreaded that walk to the mailbox, as every day it was filled with another notice, another late fee, another warning that something was going to be taken or shut off?

Have you ever felt that living in the most powerful country in this world, as a working parent, is probably the biggest condemnation, the biggest slap in the face that a hard-working American parent could get?

But now, I’m done. I will not. I cannot any longer.

I refuse to accept what isn’t acceptable.

I refuse to remain silent.

I refuse to stand by and watch other families crumble, literally be torn at the seams, emotionally and financially.

For the prompts above, a lot of you probably had responses that were the same as or similar to mine.

And you know what I say to that?

We live in the most powerful country in the world.

And we are the only industrialized country in the world that does not offer paid parental leave to its working parents.

They say don’t wake a mother bear as she and her cubs are sleeping soundly.

Well, I say don’t get on the wrong side of a hardworking American mother, faced with no other choice but to leave baby after baby.

Because her claws just got a whole lot longer.

A former United States Secretary of Labor hits it spot-on by saying, “We’re making people choose between the family they love and the job they need. No other nation on the planet is making these choices.”

But maybe, just maybe, one day we will get to say: We believed we could… and we did.

Why I got over myself and hired a cleaning company

One mom’s take on the Netflix series, “Maid”

Reaching my breaking point: when will the crazy end?