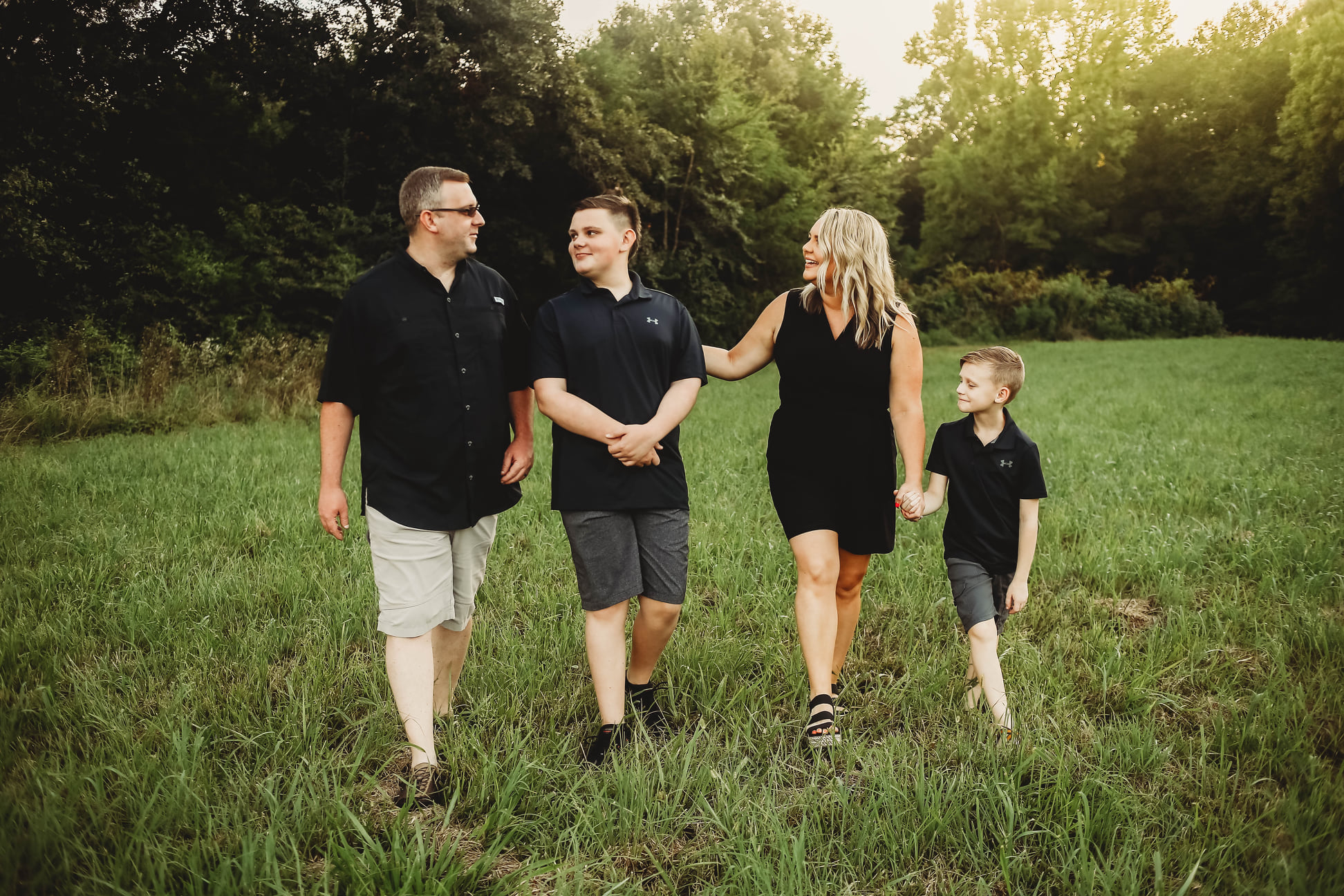 It was 2007. I was a first-year teacher, getting settled into my career. My husband and I were married two years earlier, and although we had planned to wait three or four years to have our first child, we were eager to start a family. I knew I had some problems with my cycle before I went on birth control, so I wanted to give myself time to adjust before we started actively trying to conceive. It didn’t go as planned. Nothing in my journey to motherhood went as planned.

A few months went by, and I knew something was very wrong. I was not able to have a cycle on my own, and I was putting on weight like crazy. As this process went on, I struggled with self esteem and body image issues more than I ever had. My body wasn’t working right, and it was affecting everything.

In August, I went to the doctor and was diagnosed with PCOS (polycystic ovarian syndrome). Simply put, I was not producing the correct hormones needed to produce a viable egg. Instead, I was producing layer after layer of cysts, so that my ovaries were covered. The odds of getting pregnant with PCOS without medical assistance are not zero, but they are pretty close.

At that time I was given hormones to get things working again, and Clomid to make me ovulate. I was not prepared for the emotional toll this process would take. Later on I would learn that Clomid is nicknamed “Clo-mood” by the women who take it. I would be cooking dinner or grocery shopping and simply burst into tears. Infertility is emotional enough; put Clomid on top of it and I was a basket case.

Month after month, my dosage of Clomid was increased, and I still wasn’t able to ovulate. After several months, I was referred to a team of fertility specialists in Little Rock. They continued to increase my dosage of Clomid with no effect. Of course they had much better technology than our local doctors and were able to tell that, in fact, Clomid was doing absolutely nothing but make me crazy.

Finally, I was able to see a different doctor on that same team who took a different approach. He first wanted to make sure that my fallopian tubes were clear, so he ordered a dye test to determine that they were. Little did I know that this was a painless process, but the body ridding itself of the dye is not painless. Thankfully my tubes were clear and I was able to start a new treatment.

This doctor had me sign a form acknowledging that this new drug I would be taking was not FDA-approved for fertility treatments, but it was FDA-approved for breast cancer treatment. It was definitely a step of faith, but we were ready. At this point, I was taking a 7-day pill to start my cycle, 7 pills for ovulation, and then a shot of something the very second I was supposed to ovulate. It got to the point where everything was orchestrated. I had to take a notebook to my appointments just to keep everything straight. That month I got confused and messed it all up, so it didn’t work. The next month, the orchestra was finely tuned, so it went more smoothly.

Not that we didn’t have our issues. There are some very funny moments that I won’t go into on here, but we definitely had to laugh at ourselves at times.

It was not supposed to be like this. Conception is supposed to be private between husband and wife, and I had a team of doctors, nurses, pharmacists, and family members getting it all to work. It was definitely not how I had imagined it, but we had to embrace it.

Thankfully, the second month of the new drug worked, and I finally saw those two pink lines. My husband was helping a friend move, so I called him and told him the news. We went ahead and told our families, but we had to get checked out with our fertility specialists, just in case. The first 12 weeks were considered high risk, so I was given a drug to help prevent miscarriage.

One of the blessings of being so closely monitored is that we have ultrasound pictures from the very beginning and were able to watch the baby grow. All of our struggles had paid off, but of course there was a nagging fear that my body would betray me before our miracle child could make his appearance.

In January of 2009, I went in for one of my last check-ups only to learn that my blood pressure was elevated. I was put on a monitor for the afternoon as they tried to get my blood pressure under control. As the 5 pm hour approached, I was sent to labor and delivery to be put on a monitor. It was clear by this time that I was in the beginning stages of preeclampsia. Since it was a Friday afternoon, the doctor sent me home on bed rest for the weekend, and scheduled induction for that Monday morning.

Monday morning rolled around and the induction process went very smoothly. By 3:30 am I had progressed to a 7, and then 8 and 9 quickly followed. I had been given my epidural, and I was just going to close my eyes for a few minutes until everything happened. Alarms started sounding, and my nurse rushed in. She put my husband to work putting the oxygen mask on me, while she shifted me around and tried to improve the baby’s situation. He was in distress. His heart rate was dropping.

Tears streamed down my face as I realized everything I had feared was actually happening. The waiting room was full of our family and friends, and I learned later that they all bowed in silence and prayed for this miracle child, that he would safely enter this world.

“For this child I prayed”

Malachi Daniel Brownlee was born at 4:01 p.m. on January 26, 2009 weighing 8 pounds 1 ounce and measuring 21 1/2 inches long. His poor little head was definitely smashed, but I thought he was the most beautiful baby I had ever seen.

It had finally happened. We were finally given the gift that we had prayed for. We dedicated him a few weeks later with the verse, “For this child I prayed, and the Lord hath given me my petition which I asked of Him.” 1 Samuel 1:27

When Malachi was two and a half years old, we were ready to have another child. My fear was that I would have the same problems as before, so I was able to take some of the same medications as I had to conceive the first time. I had no idea that it would work the very first month, and we were able to conceive, with the help from our doctor, much more easily that time.

Isaiah Benjamin Brownlee was born May 15, 2012 at 7:44 a.m., weighing 7 pounds 9 ounces and measuring 21 inches long. Although his story is different, we consider Isaiah just as much a miracle child and a blessing.

Since Isaiah has been born, I continue to struggle with PCOS and the various ways it affects my body. I have struggled with insulin resistance, skin changes, vision changes, among other issues. It is something I will deal with my entire life, but I am learning how my diet and choices can make a difference. I don’t have to end up with diabetes and heart disease if I work hard.

I have a few thoughts about infertility and PCOS that I want to share:

1. Choosing to receive fertility treatments does not indicate a lack of faith in God. I firmly believe that the Creator chooses to create a child, and if it is not His choice it will not happen. My husband and I prayed about our choice to receive treatments, and were able to reconcile it with our faith. That is not true of everyone. I respect the individual’s right to decide whether to receive treatment or not. We did not get to the point where we had to consider IVF, and if we had, we would have prayed about it.

2. Infertility should not be a taboo subject. When we were struggling with infertility, it was a very difficult subject to talk about. It is very personal, and I felt like if I talked about it, I was being inappropriate or indecent. There are young couples and older couples who struggle with this in silence every day. They smile while relatives tease them about when they are going to have children. They act happy when their friend calls to say she is expecting and that it was a “happy accident.” If we can open a dialogue about this subject, couples struggling with infertility won’t have to suffer in silence.

3. Couples struggling with infertility do not need advice. I was only 22-23 years old when I when I started treatments, and a lot of people just saw me as impatient. “You’re trying too hard,” they said. “Just relax,” they said. “Remember Abraham and Sarah,” they said. The best thing you can do is listen and provide support. You are welcome to have an opinion about their choices, but expressing that opinion is probably only going to cause hurt feelings.

4. PCOS is a medical condition. Just like the diabetes and heart disease that it leads to, PCOS affects the whole body and is not just a fertility issue. It affects approximately one in 10 women. You may look at us and say, “If she would lose weight, maybe she wouldn’t have those problems.” Well, yes, that is true. But what you don’t know is that PCOS crosses all boundaries and affects women big and small, underweight and overweight. Many times a PCOS patient’s weight is both a symptom and a cause of their condition. It’s complicated. Diet and exercise help, but it will always be a struggle. Please have compassion.

Infertility was a struggle that I never expected to experience. It was a time in my life that tested my faith and made me question everything I believed in. God used that experience to get me into the Word of God and strengthen my faith. I came out of the experience not just saying that God would take care of me, but truly believing and knowing it.

No matter what you are struggling with today, know that God does indeed love and care for you. He has a plan, but sometimes we veer off the path. We struggle because of sin and bad choices. Sometimes things are completely out of our control. But He can and will use those seemingly horrible and unfair trials of our life to strengthen us and make us an example to the world. All we have to do is stay strong and seek Him through His Word.

“‘For I know the plans I have for you,’ declares the Lord. ‘Plans to prosper you and not to harm you, plans to give you hope and a future.'” Jeremiah 29:11

When kindness, bravery, and love saved a life