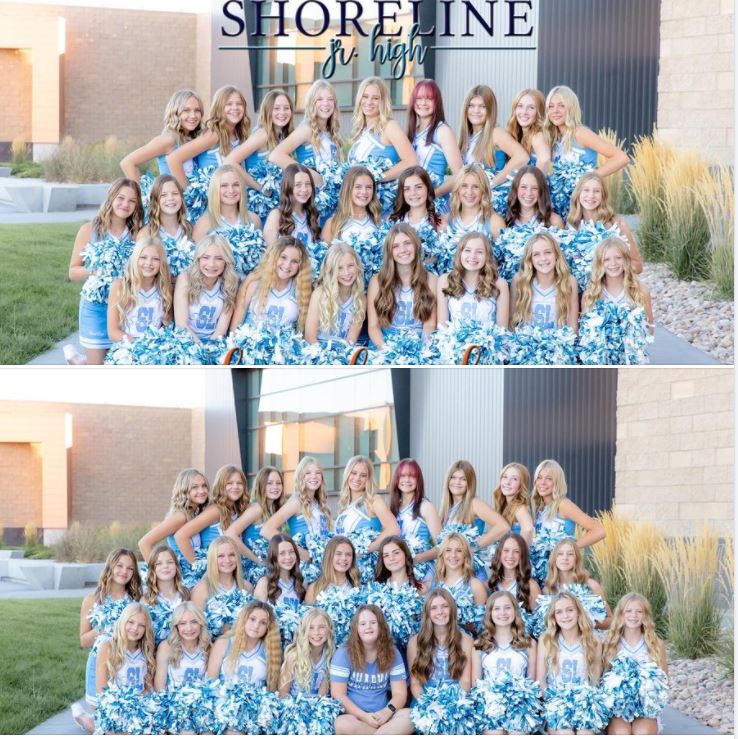 The Shoreline Junior High School cut a member out of the cheer squad yearbook photo who has Down syndrome. And they don’t have a good answer why.

Morgyn Arnold is 14-years-old and a member of the Shoreline Junior HS cheer squad. According to her sister, Jordyn, who brought this story to light in a viral social media post, Morgyn “spent hours learning dances, showing up to games, and cheering on her school and friends but was left out.”

Remember how excited you were to get your high school yearbook? You scrolled through, hoping to see your photo amongst the teams and organizations you were involved in. You proudly showed the photos to your family and friends. That’s how Morgyn felt also. And it was heartbreaking when she opened the yearbook to find that her photo wasn’t in the team photo that she was a member of.

Jordyn writes: “The first picture you see is a cute junior high cheer team. The second, although similar, includes all members of the team. It’s the SAME cheer team–SAME girls, SAME photo shoot, SAME poses, but one included all team members and one did not. Unfortunately, the first one was posted on the school’s social accounts and in the school yearbook. Additionally, Morgyn’s name wasn’t even mentioned as a part of the team. She wasn’t included. She spent hours learning dances, showing up to games, and cheering on her school and friends but was left out.”

Jordyn edited her post after she initially wrote it to clarify that this was not the team’s doing. She said the cheer team has been nothing but kind and inclusive towards her sister.

As you can imagine, reaction was swift on social media and people were justifiably livid. Morgyn has invaluable worth has a human being, as do all of us. And the thing, this isn’t even the first time this has happened: “This is the second time in three years that sweet Morgyn has been left out of the yearbook. Two years ago they didn’t even include her in the class list.”

What is going on at that school that they are leaving this precious girl out of the memories of the school? What is wrong with them?

If you’re wondering what the school has said in response to this fiasco, they are “deeply saddened.” Of course they are. Now. The Today Show got a hold of the school’s now-deleted full statement, which reads:

“We are deeply saddened by the mistake that was made. We are continuing to look at what has occurred and why it occurred. Apologies have been made to the family and we sincerely apologize to others impacted by this error. We will continue to address it with the parents of the student. We will continue to look at our processes to ensure this does not happen again.”

Jordyn ends her post calling everyone to be kind and considerate, to stand up for what’s right:

“Please, be the one person whose actions are inclusive. Be the person who stands up for what’s right and makes a difference. Teach those around you, kids and adults, to look around and see the Morgyn’s being sidelined. We are better than this. It’s about time we start showing it and it’s time we hold each other accountable for it.”