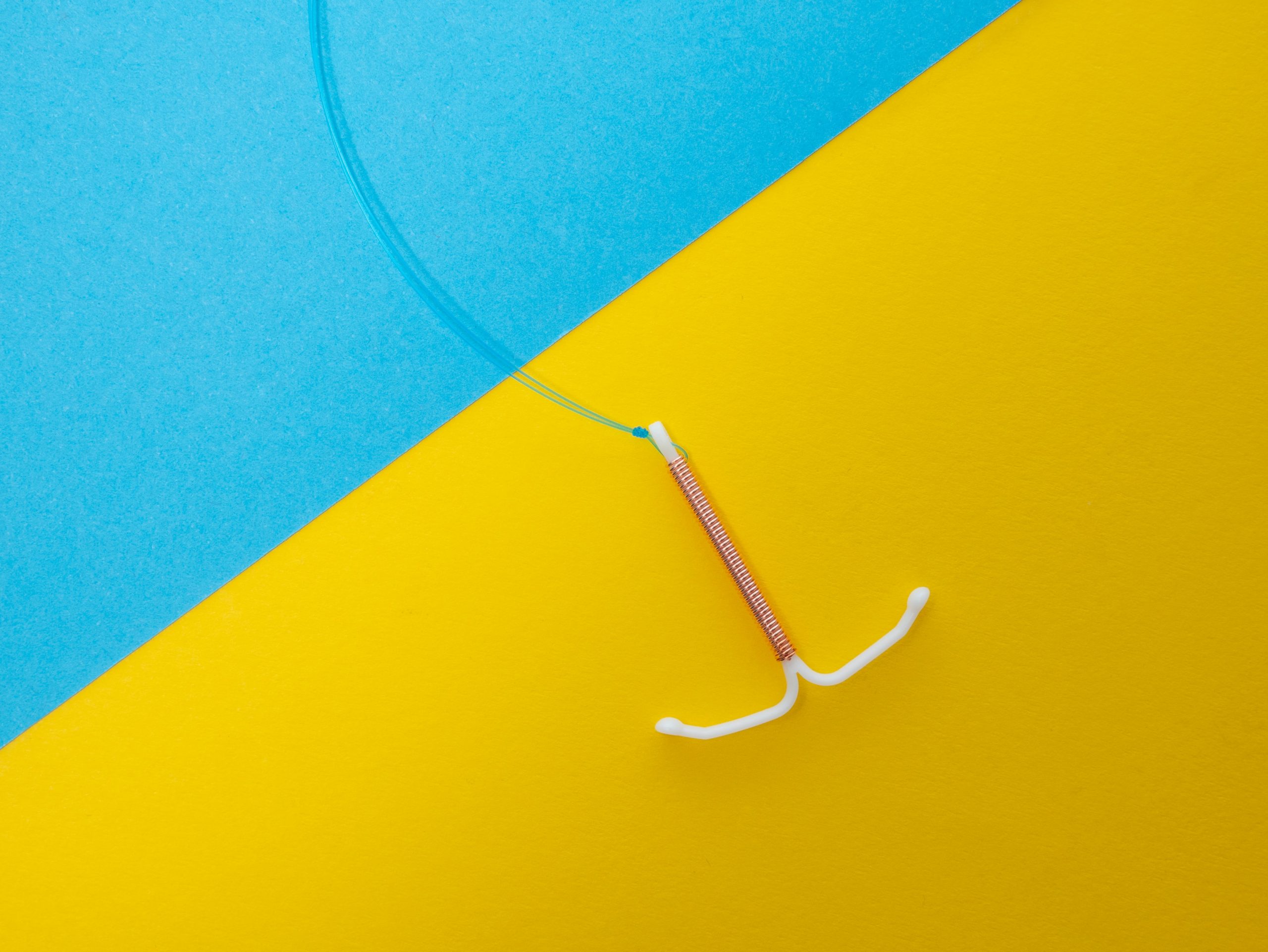 From the time my wife and I started dating, she was always on some sort of contraception. She bounced around from method to method, changing it every so often. She used everything from the ring to the shot, and condoms to an IUD. Even after we were married, there was always some sort of “prevention” in place. It wasn’t until after Abby had left Planned Parenthood and we were confronted with new information about contraception that we started to look a little deeper into our own reproductive responsibilities. We both had different paths to our life without birth control. But we ended up in the same place, and I will never forget the moment that Abby said, “I had my IUD taken out today.”

For eight years my wife was involved in the birth-control/abortion industry working at Planned Parenthood. She wasn’t just selling it, she was also a client.  When it came to birth-control, as far as I was concerned, it was mostly up to her. Planned Parenthood and the other pill pushers love to shout at you, “It’s a woman’s choice!” That was the dogma the we had subscribed to at the time. I thought I was being supportive by letting her make the decisions for her, and ultimately our family. Sure I was bummed about not having more kids, but at that point, it seemed like her career was more important. We had one kiddo and that seemed to be enough.

When Abby finally left Planned Parenthood in 2009, she and I both had no issues whatsoever with any form of contraception. It was going to take a little time for all our arguments in support of contraception to be broken down. In her exit form Planned Parenthood, we had both gone from supporting abortion to being full blown pro-lifers, so I guess anything was possible.

It All Starts With Our New-found Faith

People of varying belief systems come to Natural Family Planning in different ways. For many, they use it because it’s healthy and it respects women’s natural functioning. For Abby and me, we were exposed to NFP at church, and our reasons for using it include religious reasons in addition to all the health reasons.

Considering almost every new friend we made after Abby’s conversion was Catholic, it didn’t take long for us to become regulars at Sunday Mass. And that’s exactly where we needed us to be. Who knew we could learn about contraception and a little reproductive biology by attending church? After a couple months of regularly attending Mass, we decided to start RCIA (Rite of Christian Initiation of Adults). We wanted to at least learn about the Catholic Church and see if joining was right for us.

In our first class, we were given a new Bible, a copy of The Catechism, and a copy of Theology of The Body For Beginners by Christopher West. This book is where it all started for me. I usually don’t just pick up books and start reading right away. But for some reason I did this time. I won’t go into every detail about the book. It covers way too much material. However, by the time I was done reading, I knew I wanted to become Catholic and I was 100% in line with Catholic teaching about contraception.

Everything the Church taught just made complete sense to me. It wasn’t just the religious aspects that got my attention. I was more impressed by looking at the natural design of our bodies and what they are meant for. We are made to reproduce. That requires a man and a woman together in the act of sexual intercourse. Granted sex is supposed to feel good and all that good stuff, but if you remove the purpose of sex and make it all about the orgasm, then it becomes a pretty selfish act instead of a loving one that could result in new life. In order for our bodies and for sex to fulfill their natural purpose then sex has to have both the orgasm and an openness to reproduction. I’ll let Christopher West say it better:

“When we divorce sex from its natural orientation toward new life, what is left to prevent the justification of any and every means to sexual climax? When we sterilize sex we fundamentally disorient the act. It no longer points of necessity to marriage and raising of a family. Indulging Libido for its own sake becomes the name of the game and we eventually treat natural, vaginal intercourse as only one of a-million-and-one ways of indulging libido. When we pry sex loose from it’s most natural consequence, we inevitably lose our moral compass.”

So there I was with a whole new outlook on sex, marriage, Church, and life in general. I was so excited to dig into Catholic teaching and learn more, but my next challenge would be getting Abby to jump on board the no contraception train with me. That was priority number one.

As it turns out, that was no challenge at all. The first Sunday after I was finished reading the book, we were at Mass. I thought everything was pretty normal about the service except that Abby was undergoing a huge change of heart and philosophy all while the service was going on. It was like a lightning bolt. Blink and you might miss it. I didn’t know it at the time, but Abby spent the entire Mass looking around at all the families and all the children sitting around her. She knew right then she wanted to grow our family, and all she could think was, “I have to get this IUD out of me!”

That afternoon, when we got home from Mass, Abby told me she wanted the IUD out.

My first response was, “Really? Are you sure?”

Abby: “Very sure. I want it out tomorrow, as soon as possible.”

Awesome! I wasn’t going to have to convince her to do away with birth control. She got there all on her own. It’s almost funny how we had completely different roads to the exact same destination. We were both on the same page and we didn’t even know it.

The next day, Abby called her doctor and told her she wanted to get her IUD out. Here’s how that conversation went:

Abby: Hi. I need to have my IUD removed today.
Receptionist: Are you having any problems?
Abby: No. I just need it out immediately.
Receptionist: Okay, we can see you in three weeks.
Abby: No good. I need to talk to a nurse.
…
Nurse: Hi. You want to get your IUD out?
Abby: Yes. I’m not having any problems, but I need to get it out today.
Nurse: Well, we don’t have any appointments today. We could get you in a couple weeks.
Abby: Listen, I know how to remove this thing. Either the doctor takes it out today or I take out. It’s coming out today.
Nurse: Can you come in at 1:00 pm today?
Abby: I’ll see you then.

Once Abby got the IUD out, every conversation we had about growing our family was exciting and a huge shot in the arm for our marriage. Just the idea of more kids brought us closer. Sex became more meaningful. Food tasted better. Our faith became deeper. There weren’t any fireworks and there wasn’t a party in honor of our new decision to drop contraception, but I can say it sent our marriage in a whole new direction that has been one awesome ride.

Infertility, NFP, and Lots of Kids

It wasn’t super easy after we decided to have more children. Once Abby had her IUD out, we went through over a year of infertility. That’s shorter than a lot of people we have known that used hormonal or any other kind of contraception. We assumed we might not be having any more kids. That was a tough pill to swallow. But, after a lot of work between Abby and her doctor, we were able to conceive our second baby…the first of three beautiful boys. Alex, Luke, and Carter came to us one after the other, three years in a row. These boys are proof to us that being on God’s plan and being open to life is the best life to live. Now we use NFP (Natural Family Planning), and it works great for us.

As for now, in our marriage, we don’t use any chemicals or latex. It’s not just Abby’s fertility anymore either. There is no more, take a pill and our sexual relationship just ends up on auto pilot. We have good ole natural, possibly making-a-baby sex. We both understand that her fertility is ours and we work on it together. The good news is that NFP has brought us closer as a married couple. Nothing will ever come between my wife and I in our bed ever again. Well, maybe our 2 year old, 1 year old, and 6 month old boys. But nothing else!

If you want more information about NFP options, you can visit www.iusenfp.com. You won’t be sorry.

This post was originally written in 2015. Doug and Abby went on to have eight children in all, including one adopted son.

6 Ways to Keep the Passion Alive After Kids

Enduring the holidays as a divorced parent

3 Questions Women Should Ask Their Husbands