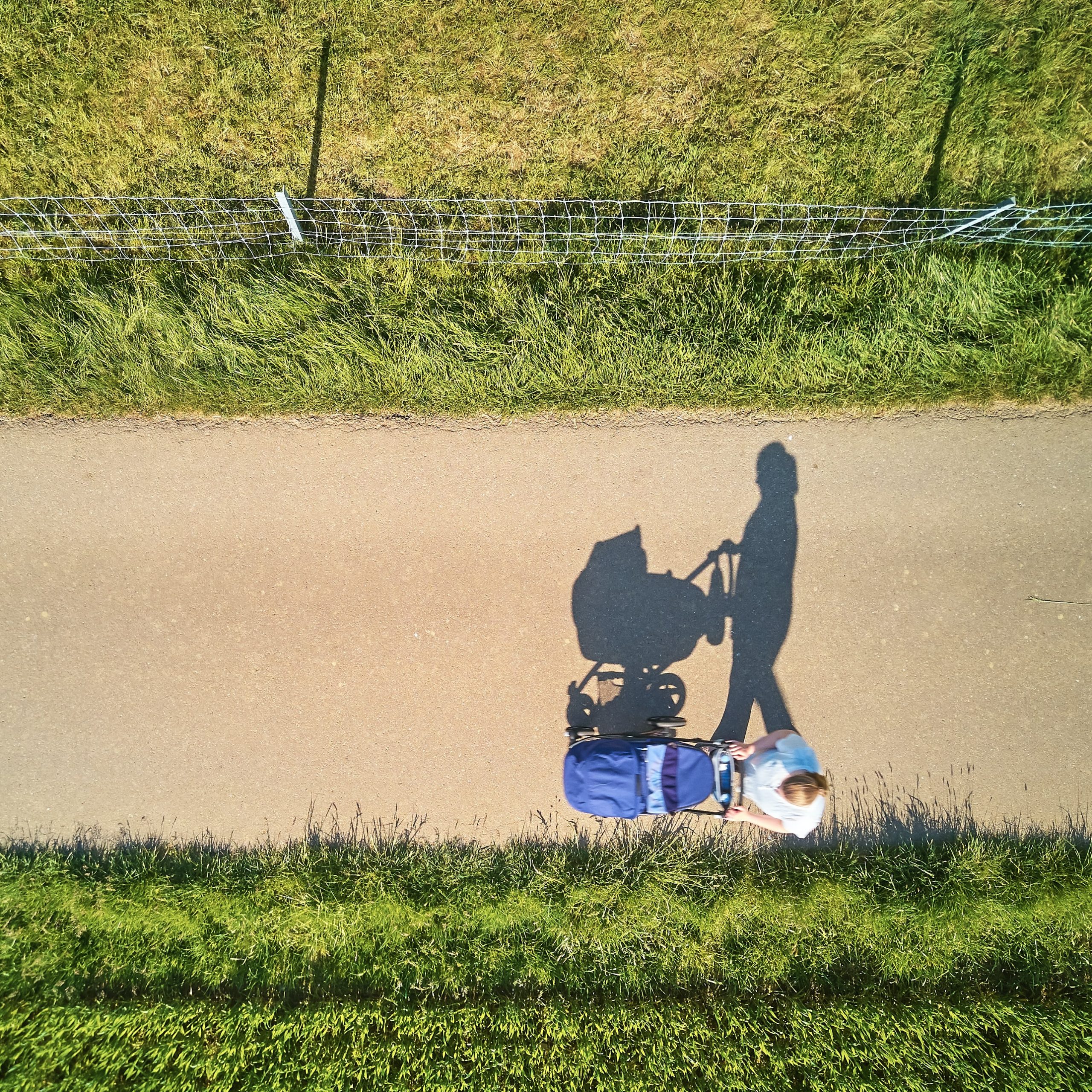 “…it was the day I gave our stroller away.”

That is my response when people ask me what my turning point was. This is when I can confidently say that my life began to change, the day I gave our stroller away.

Tonight as I took my 5th baby on a bike ride, for some reason I felt such joy being on the bike and it was such simplicity that this story consumed me.

As it may seem puzzling to most that an experience with my stroller would be a forever changing, life impacting moment that would change the course of my life, let me explain.

I felt like despite holding onto the fact that my children were safe and healthy, it was suffice to say everything else around me was crumbling. Life, you could say, was hard.

I had attempted to make the necessary move back to my teaching job after the birth of my third baby; despite the all too short six weeks of an unpaid leave, I can’t begin to tell you how much that had already set us back. Your typical American family, decent but low middle class incomes, two really stable jobs, but after the mortgage, vehicles, school loans, groceries, utilities and childcare were paid, there wasn’t a penny left over.

Not only were we working hard to make ends meet, we were working hard and yet going under each month. We had already depleted our savings account after having two moves back and forth across the country and living off of it in between jobs.

When you take a family who barely makes ends meet with their full salaries, and then take one away, even for an unthinkably short six weeks, you can imagine what happens. Now do that three times over after my maternity leaves and the average person can begin to calculate the damage.

My emotional state wasn’t any better

But as much as finances were broken, my physical and emotional state was even far worse. When I passed over babies one and two to leave to go back to teaching, it hurt and it was terrible but somehow, I was able to do it and work through it. One would think baby number three

would get easier, but lo and behold, something was different. I felt a different physical and emotional turmoil. It hurt to breathe, it hurt to think, and I began living in such resentment that I was passing over my newborn baby, heading off to my job where I was working to simply give half of it away for my kids to be taken care of by someone else other than me.

Everyday I went off to work in tears and experienced such a deep anxiety, that the day I drove myself to the doctors and was diagnosed with post partum depression, it was to no surprise for me. If that is what PPD truly felt like, I wouldn’t wish it upon anyone. So I decided to take the rest of the school year off, again unpaid.

And then it got even worse

There was no financial plan, there was no back up, and at this point, that decision not only caused huge strains upon my marriage, but pretty much made our finances corrupt. Sooner rather than later, the walk to the mailbox each day became a dreaded experience, because there I would find overdue bills or notices that things would be shut off.

Then came the notice that our vehicle was going to be taken away. I promised myself I wouldn’t watch, but when the time came, I couldn’t peel my eyes away.

As I had a toddler wrapped around each of my legs and a baby in my arms, my daughter asked where they were taking our van. I mustered up every ounce of strength I had left in me to calmly respond, “They’re taking it to another family who needs it, Baby.”

As much as I was hurting and breaking inside, I tried to make the best of most of our days and we just used our stroller to go on walks, travel to nearby parks, and it kept my children and I busy and preoccupied enough. And when I thought surely, we had hit our rock bottom, it seems that we would slip a little further.

The day I had to go in each of my children’s rooms to empty their piggy banks to gather enough change to get a small amount of food for that week, well, it may have been one of the most humbling moments of my entire life.

I found myself walking from room to room everyday, looking for something else to sell. I found myself in parking lots, meeting others who would offer me a small payment for whatever it was that I was trying to sell.

As you can imagine, I had come across people from all walks of life, and it wasn’t uncommon that I was meeting people several times a week, trying to scrape together money in any way I could.

And then came the Wednesday that everything would forever change. I found myself sobbing in the shower, truly, beside myself, crying out to God, wondering why He hadn’t helped us yet, why things kept getting worse, and why I felt like there was no end in sight. I had locked the bathroom door and simply felt that this was it, I surely had hit my total breaking point.

In between my incessant crying and sobbing, completely drowning in my own self pity, I was consumed by the thoughts of a mother who I had come across when I was selling items. She had shared with me that she had five young children, two of which were twin baby boys, and not only didn’t she have a vehicle, but she didn’t even have a stroller to get them back and forth to frequent doctor visits she had to make every week.

I felt overcome with the most persistent urge that I needed to go to her and give her our stroller, like that very night.

Giving my stroller away

It was quite unexplainable and to this day, it gives me the chills that that is what God seemed to answer me with, amongst my cries and sobs and begging and pleading for help. I got out of the shower and went downstairs to tell my husband that I needed to take his work car to deliver our stroller to this woman.

He thought I was absolutely insane for several reasons: one, it was the kids’ and I’s only means of transportation at this point; two, it was Wednesday evening and my husband didn’t get paid until Friday and he had less than a quarter tank of gas left – we didn’t have any money until then and he had an hour round trip to work, likewise this woman lived thirty minutes away, so that would be an hour round trip to deliver this stroller to her.

I couldn’t explain it, but I felt the deepest conviction that those facts didn’t matter to me, I was throwing the stroller in his car, and off I went. My oldest daughter asked if she could ride along with me.

We met in a Dunkin Donuts parking lot. I don’t remember her name, but I’ll never forget the way her face looked. I hadn’t shared with her our current situation, nor did I need to and when she thanked me up and down how this double stroller was going to help change their life, it was all I could do to not burst into tears right there in front of her.

I promised myself I wouldn’t cry in front of her or make her feel worse. I played it off as if it wasn’t a big deal at all, and that I was so happy that our stroller was going to help her. And as I walked back to the car, I saw my daughter watching each and every move intently.

Not long ago she saw our van being taken away, and there I was, giving our now, precious, daily means of transportation away, too. As I sat down in the front seat, the tours poured. I felt such a mixture of pain and happiness absolutely erupt from me.

Giving was the answer

As the gas tank was now even lower, I was praying we would just make it home, let alone did I know how my husband was going to make it to work the next day, but there I was – I still felt good.

Amongst such turmoil, as I was trying to survive one of the deepest and darkest and arguably, worst times of my life, I found myself feeling better – I felt my heart experience a happiness I hadn’t recalled in the longest time.

But that Wednesday night, as I hit my last breaking point, He had given me my answer: it was in giving. It was giving without thinking. It was in helping others without expecting anything in return. It was the secret that I had been missing all this time through the darkness.

I’ll be honest with you, to this day I have no clue how my husband was able to get back and forth to work with as little gas that there was left; he very well may have possibly just been driving on God’s fumes. And I don’t exactly remember how long after that night that things started to turn around for us, but sure enough, they did.

That Wednesday evening, not that many years ago, I gave away our stroller, and I can say with absolute certainty, it forever changed my life. It’s the secret to this life, I’m certain: to give and to help and to do so, without thinking. It’s easy to give and help when there is an abundance and when things are going good, but that’s not always the case. I was shown that even in the darkest, most humbling times, we are still resourceful – we still can do amazing things.

On that drive home that evening, as hundreds of tears that I didn’t even know I had left in me, just kept incessantly pouring down my cheeks, my daughter had asked me why I was so sad – again. I smiled and turned around and told her, “No, Honey, Mommy is happy. These are happy tears.”

And even at a young age and the uncertainty we were living in and that she had endured, it was as if that made total sense to her. One single tear strolled down her cheek, she smiled and said, “If you’re happy, Mommy, then I’m happy, too.”