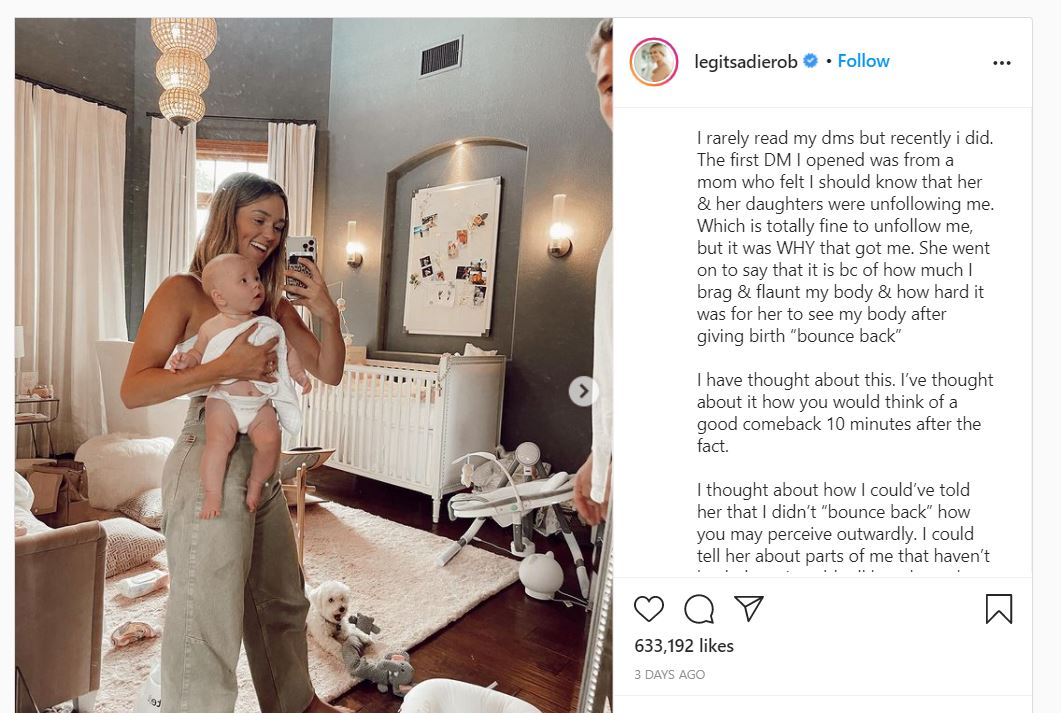 Can’t a postpartum girl catch a break? Apparently not if you’re Sadie Robertson, who gained fame on the show Duck Dynasty and had an adorable baby in the past year. Sadie posted a photo of herself on Instagram holding said cute baby in pants she had not worn since she was newly pregnant.

Pretty standard stuff when it comes to postpartum bodies, right? Woman gets pregnant, grows a baby, can’t wear her normal clothes for awhile, hopefully gets back into pre-pregnant pants if so desires. That’s what happened with Sadie. But then a mom slid into her DMs and declared that Sadie was flaunting her body oh-so-much and she was unfollowing her.

[Heavy dose of sarcasm] Oh no. Not that.

Every woman’s body is different and while some women have really good genes and can bounce back to their pre-pregnancy body faster than others, it doesn’t mean that when they post those photos that they are bragging about it. Can we not take things so personally? Just because Sadie Robertson posted a cute photo of herself in pre-pregnancy pants almost a year after giving birth doesn’t mean she wants all women to get back into those same clothes during the same time frame. For goodness sakes people.

This is what Sadie wrote about the mom who messaged her:

I rarely read my dms but recently i did. The first DM I opened was from a mom who felt I should know that her & her daughters were unfollowing me. Which is totally fine to unfollow me, but it was WHY that got me. She went on to say that it is bc of how much I brag & flaunt my body & how hard it was for her to see my body after giving birth “bounce back”

We really don’t think Sadie cares that much about people unfollowing her. But it was the reason why this mom gave her that obviously hit a nerve. It was because Sadie doesn’t post about the hard stuff. She chooses to focus on the positives:

I didn’t tell her that and I don’t post stuff like that bc the truth is my year, my days, and certainly my life are not defined by my body, and especially not the negative things my body is faced with because tbh it’s done some awesome things this year i’d rather document! So i post the good mostly. Does that mean I’m bragging? That is certainly not my intent. I just feel as though we have better and bigger things to talk about.

Yes, she has “better and bigger things to talk about.” That’s a darn good reason to focus on the things she decides to focus on. Maybe we should take a page from that book instead of decided Sadie Robertson wants to flaunt her body and make other moms feel bad.

Focus on the good

She leaves her fans with this advice:

Ladies, I just want to challenge you not to become insecure bc of what someone else chooses to or not to post. Our confidence should not be found on the measure of how good or bad someone else is doing.

Yes, girl. Moms, we have grown babies inside of us. That is amazing. If you’re struggling with a postpartum body that isn’t doing what you want it to do, give yourself some grace. You’re amazing. Your body is amazing. Focus on the good.

No, I will not call breastfeeding “chestfeeding”

Awestruck in the Bathroom

When PCOS Nearly Ruined My Chance at Becoming a Mother