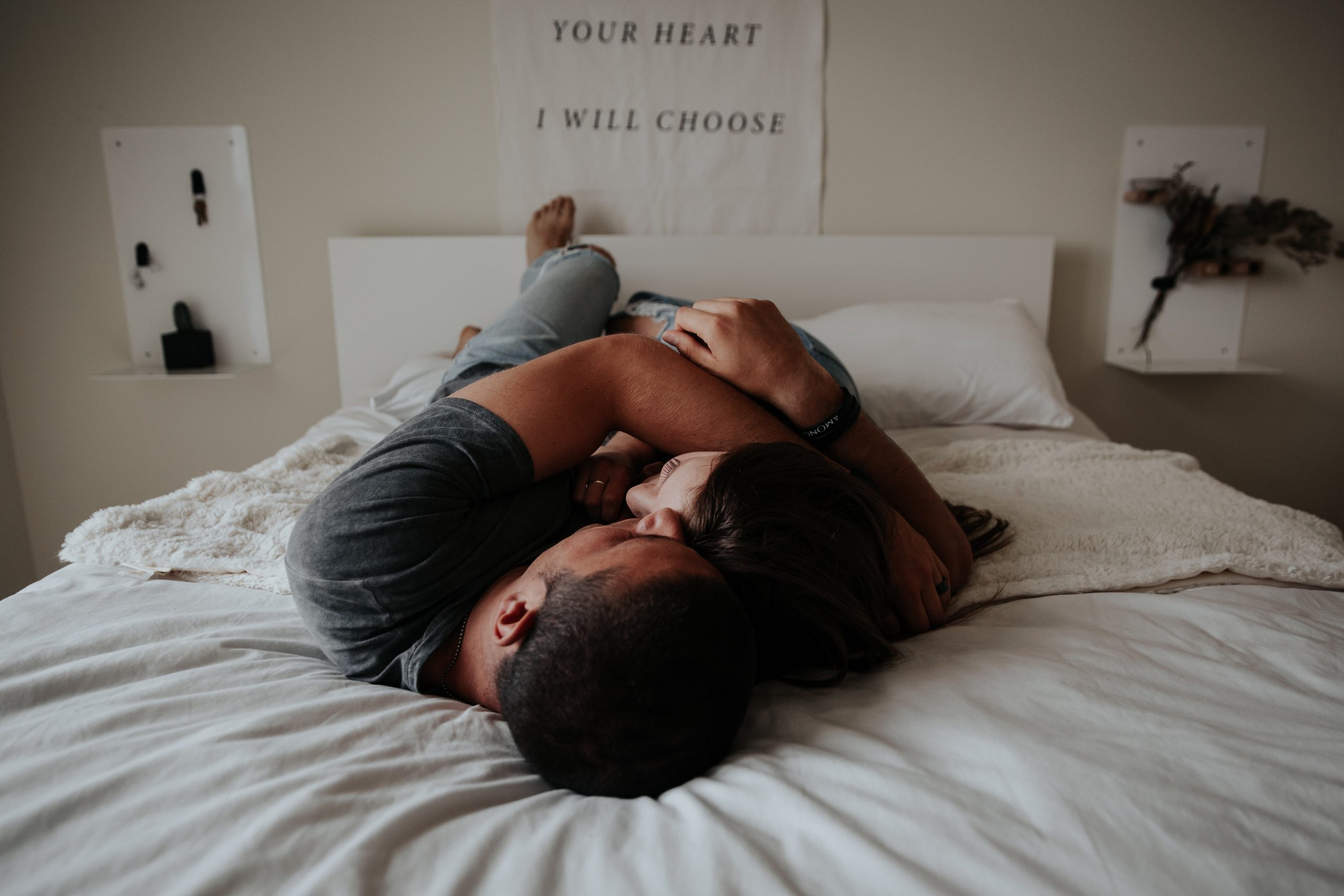 When our first child Grace was born, Abby went through over a year-long struggle with postpartum depression. (For the sake of brevity, let’s use PPD from this point forward.) To say that this was an extremely stressful time for our marriage and entire family would be an understatement.

Men are weird. We think everything can be “fixed”. If you’re hungry, eat something. If your car isn’t running right, take it to a mechanic or learn how to fix it yourself. The sink is clogged, get under there and find out why. To be honest, this is our approach to life in general.

When Abby experienced PPD, I was not the most understanding husband. I did not support her like I should have. I didn’t know how to “fix” it. I didn’t even know exactly what needed to be fixed. I just wanted my wife back. I wanted her to behave like she used to. Why couldn’t she just be happy with a loving husband and baby? Why were we suddenly not enough?

I feel like if we had been more aware of the signs and symptoms of PPD, we would have addressed it much sooner. The only thing I knew about PPD were the stories I had heard about moms committing horrible crimes against their children. Later, I would hear about how their defense attorneys would blame their actions on Post Partum Depression.

I Was So Wrong about PPD

It was as if “Post Partum Depression” became the new catch phrase in the media and courts of law. Before my own family experienced PPD, the only thing I associated it with was something that made women crazy. PPD had been lumped in with temporary insanity in the courtrooms and on the news. So why would I ever think my wife had PPD when I knew she wasn’t capable of committing crimes like the ones I had heard about on TV? Now, I now know better. Abby’s struggle has taught me that there are all different levels of PPD.
I do NOT share this with you for pity. That’s the last thing I want. I am just trying to give my honest take on what the year our family dealt with PPD was like as a husband. As husbands, it may be tempting to chalk our wives’ PPD symptoms up to hormones and exhaustion. Abby and I both figured everything she was feeling was completely normal and would pass.

But it didn’t pass.  Her suffering not only continued, but intensified. The crying, lack of ability to bond, complete loss of sex drive, sensitivity, and her seeming withdrawal from life itself took its toll on our family.

I feel like it is important to add that there were times when Abby could hide her struggle with PPD from others. When she had to, she was able to put on a good face and appear to be her old self.

Abby is a therapist by education. I think it was easy for her to mask what she was feeling and appear normal. And like the saying goes, “Counselor, heal thyself,” she thought that she could fix herself. Looking back, I should have known better.  More and more often, a seemingly good night would end in tears after everyone else was gone and it was just me and Abby.

There were times I wanted to ask Abby why she wasn’t playing with Grace as much as she could. The problem was, whenever I would address it, I would get my head bit off and accused of insinuating that she was a bad mom.
I knew the truth.

Abby was a fantastic mom who loved her daughter. Sometimes, she seemed to have a valid excuse for not staying up with Grace at night or getting down on the floor to play with her. I am not saying Abby was neglectful, but there was an obvious wall that kept Abby and Grace from bonding the way I thought they should. The fact that when Abby really did make an effort and Grace seemed to prefer me made this time and the disconnect even harder for Abby. For her, this felt like rejection and it caused her to withdraw even farther from the love of our family.

Bonding with Grace wasn’t the only problem. Any time I tried to plan a special date night, or we had an opportunity to visit with friends, Abby had no desire to participate. She just did not want to be around people. If we did go, she would usually end up crying. In fact, the crying could be triggered by almost anything, and everything seemed to make Abby feel guilty.

We went to visit Abby’s aunt in Nashville, Tennessee for Christmas in 2007. Grace was 13 months old. Everyone from her mother’s side of the family was going to be there.  Abby was going to have an opportunity to visit with several family members whom she hadn’t seen in a long time. We were both excited, and I figured this would be a fun trip.

It was fun at first.  Abby seemed chipper and excited to see family. After about a day, Abby started disappearing to our room and staying there for a while. She said she was tired or didn’t feel well.

I Didn’t Handle it Right

Pretty much any excuse to stay by herself. For me, this had been kind of normal for the last year, but I was a little annoyed considering she was with family she never saw. Why was she wasting time alone in our room? Why couldn’t she be social and enjoy time with her family like everyone else? As usual, I handled it the wrong way and accused her of being rude. She tried her best to come out of her shell, but some how always found a way to isolate herself.

One day during our visit, several family members offered to watch Grace while we went out on a date. I was pumped! Alone time with the wife sounded great. I also figured I could try to help put an end to Abby’s funk. We were going to the Opryland Hotel and then downtown Nashville to walk around. I was excited to eat some good food and listen to live music with Abby. To make a long story short, Abby just wanted to go home after being out with me for only a few short hours. We had the whole night alone if we wanted it. But, with tears in her eyes, she asked if we could please just go home.

I was pretty upset with her. On the way home, I just couldn’t wrap my brain around Abby’s feelings. This was the worst it had been. I had gotten to a point where I couldn’t handle all the tears and isolation anymore. Again, as a man, I thought it was my job to “fix” it. If she wasn’t happy, it had to be my fault. But all my efforts had always fallen flat. The truth is, I just didn’t get it.

I Asked for Help – from Abby’s Mom

When we got back, Abby went straight to bed and started crying. I think it was a mixture of me being a blockhead and her feeling guilty. I was at the end of my rope and wanted to do everything in my power to help her, but every time I did, I got frustrated and acted like an insensitive jerk. So, I did the next best thing and recruited Abby’s mom, Kathleen.

Kathleen went into our room where Abby was crying and they had a good long talk. Abby spilled her guts about everything she had been feeling for the last year. Her mother listened patiently. By the end of their conversation, Abby decided it was time to see a doctor.

Abby went to the doctor, was diagnosed with Post Partum Depression and Post Partum Psychosis, and was prescribed medication. We still struggled a bit at first. It’s not like the medication was an instant fix. Getting the diagnosis and medication was only the first step. It was a gradual change, but Abby’s old personality started to come back. We were able to address everything rationally and move forward.

I Didn’t Know How Much Abby Was Hurting

I remember talking to Abby after her diagnosis, and after she was regulated on her medication. She told me that there were many times that she could actually visualize herself smothering Grace or throwing her up against a wall or on the floor. She talked about how she wanted to just run her car off of a bridge and take both her and Grace’s life.

I couldn’t believe how much she had been struggling…and how I didn’t see it.

Even today, just thinking about the state of her mind during that time gives me a pit in my stomach. Her desperation during that time was only escalated by my callousness. Looking back, I wish I had known more and been more understanding. I shouldn’t have taken it so personally.

Everyone wants to be the perfect parent. We all want to get it “right” from the very start. Nobody wants the help of a pill or counseling to get them through parenting. It is hard to admit when we need help. It is also hard to tell the ones we love how much we are truly struggling.

I think today’s “mommy war” culture has caused a lot of women to feel ashamed to ask for help with PPD. There is also a weird stigma that comes with taking depression medication. This is unfortunately especially true in Christian circles.

Prescription medication is not the only cure or approach to dealing with PPD, but you can’t just pray it away either.

It is a serious imbalance in the brain and it must be dealt with quickly. There is no just “wait and see” with PPD. The longer you wait, the more dangerous it becomes for your wife and your baby.

As men and husbands, we are called to love our wives. We are supposed to serve them. The hardest thing about PPD for a man is knowing when to speak up. There is no fix-it manual. There isn’t a user’s guide or reset button. It’s not like you can just tell your wife you think something is wrong. That’s a good way to get punched.

PPD is also NOT something you can take lightly as a husband. You have to approach this in an understanding, sensitive, and supportive way. Is there one way to do it? Nope. All I can give here is my experience. I hope that by telling this story, more men and women will be open to speaking up about how they dealt with PPD and walk alongside others who are in the trenches.

To read about PPD from Abby’s perspective, Part 1 is here and Part 2 is here.

Depression and suicide do not discriminate