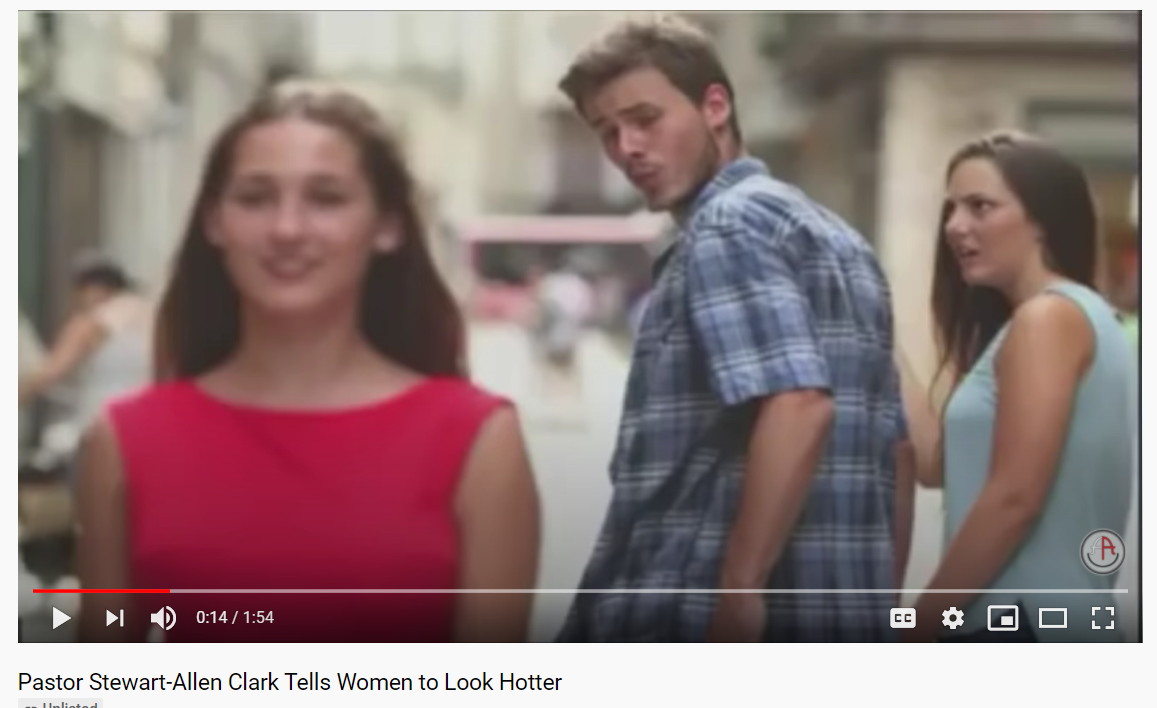 Hey ladies, if you don’t have enough to deal with, add in making yourself a “trophy wife” while you’re in the midst of dirty diapers, a full-time job, cooking dinner, and laundry – according to one pastor in Missouri, who is now on leave for his cringe-inducing sermon about expectations for married women.

Stewart-Allen Clark, a pastor at First General Baptist church in Malden, Missouri, became an overnight sensation for his ridiculous sermon that was posted to Facebook and has since been taken down, but, due to the wonders of the Internet, was preserved in part on YouTube:

Pastor Stewart-Allen Clark is really not happy with the current state of married women. He’s completely fed up that all of them don’t look like supermodels. And he told the whole world about it:

“Why is it so many times that women after they get married let themselves go? Why is that? Why do they do that?”

This pastor gives his sermon while holding a Bible, a book that he won’t find upholds his words. Proverbs 31 is an often-cited chapter, which upholds the virtuous woman who works hard for her family. It is not mentioned in this pastor’s sermon. If he did read it, he’d find that the very Bible he holds says of this a Godly wife, “Charm is deceitful, and beauty is vain, but a woman who fears the Lord is to be praised.” (emphasis mine)

Like a bad infomercial, Pastor Clark may as well have said, “wait, there’s more!” He literally says “and don’t give him a reason to look around like this distracted boyfriend” and pulls up the wildly popular meme on his slideshow at the church.

And then, just to be sure the wives in his congregation understand who exactly he wants them to measure up to,

“Now, I’m not saying every woman can be the epic, the EPIC trophy wife of all time like Melania Trump. Most women can’t be trophy wives but, you know, like her. Maybe a participation trophy? I don’t know.”

And just to make sure the poor women listening to this guy completely understand who he doesn’t want, he says, “but you don’t need to look like a butch either.”

He also blames women for the lustful actions of men, as if we need to get into that. He says men “can’t help themselves.” There are specific virtues that apply directly to these thoughts men have that clearly are meant to be pursued by men who desire to be holy, to respect and honor their wives, and to be good men. This sermon is a nightmare. Not only does the pastor hound on women to look amazing every day, all day, but then blames men for checking them out, and who knows what else, and releases men from any responsibility of their own actions.

I wish this was made up. In the spirit of charity, I’m also not going to say what I really think when I look at this guy preaching hotness to women. Ladies, you can figure it out.

We are already invaluable and loved

Look, both men and women are made in God’s image and likeness. We all have inherent human dignity and invaluable worth. Invaluable. Read that again. We don’t need to look like supermodels to be loved. All of us, married or not, should strive to be healthy and do good things for our bodies because our bodies are gifts from God and the “temple of the Holy Spirit.” But this doesn’t mean, by any stretch of the imagination, that wives should strive to be trophies for their husbands because some guy with a Bible (that he clearly isn’t reading) says so.

You are worthy to be loved. And you are so loved already by your Creator. Every woman sitting there in front of that pastor who was crying inside (or out) deserves a dozen roses and lots of hugs, hopefully from her husband. Church is a place where people should come to feel loved and wanted and encouraged – not torn down like this.

According to Pastor Clark’s church, he is “seeking professional counseling.”

Watch Your Mouth, Girl: 5 Things I Wish I Didn’t Say

I re-married my ex-husband.