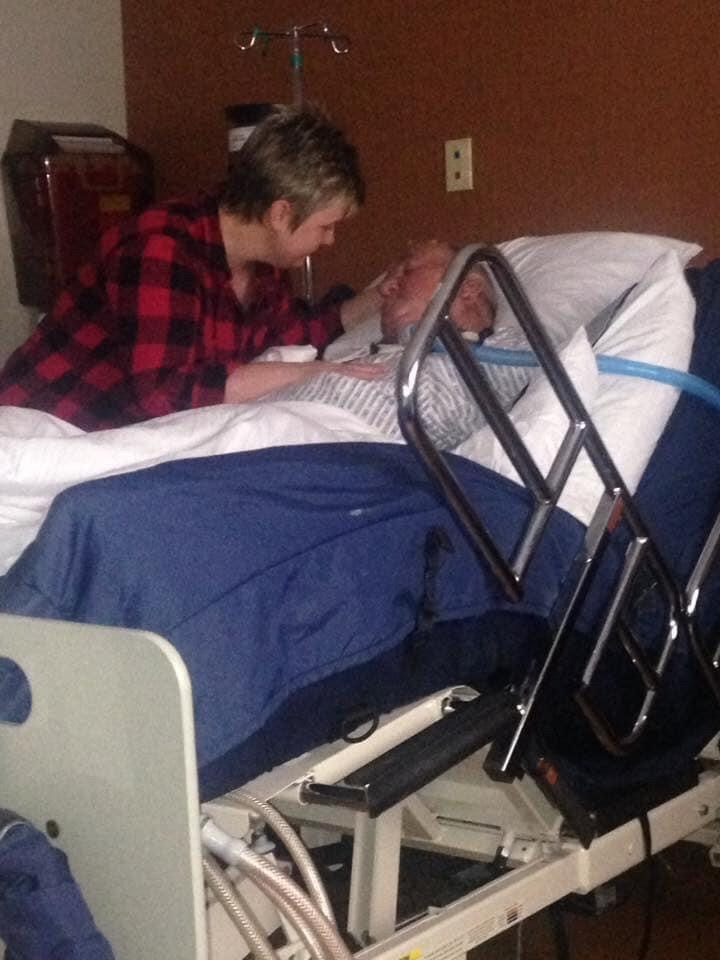 I didn’t grow up knowing my father. I knew “of” him and what he had done – but that was it. I came to know him as an adult. Our relationship was unhealthy and dysfunctional on so many levels. Some my part, some his. I had many amends to make and thankfully, the Lord opened that door and made the opportunity.

My father committed a murder. Before that, he committed aggravated battery. He was an alcoholic. He was rage filled. And even though I didn’t know him, I ended up just like him. Inner vows are no joke. And genetics, well, I’m not sure I can blame any of it on that. I made my own choices. I thought I had forgiven my father. I really did. In my pride, I said it and repeated it – but it was a badge I wore as if it made me a better person than him.

How do you know if you’ve forgiven someone? When they do something you don’t like and you don’t throw that other thing they did in their face.

My dad got out of prison in August 2001. On September 8, just a couple of weeks after his release, he accompanied me to an abortion clinic in his first fatherly duty. I was 28-years-old and I needed someone to drive me for this second trimester procedure. In retrospect, I wish he would have fathered me that day and said “don’t do it!”, but that expectation would have been unrealistic. It’s almost like I was daring him to be my daddy.

He didn’t step up

Rather than deny my roots, I followed my father’s lead and became what I said I never would – a killer. I owned that inner vow that day and suddenly I knew. It was obvious. I had never forgiven him for killing my mother or wanting to abort me.

The procedure didn’t go well. I hemorrhaged and the staff had to call 911 – the doctor had perforated my uterus and could not stop the bleeding. I was taken by ambulance to the hospital. My father was terrified. He had no idea what he got himself into.

My life was a mess

A few months after my abortion, I had a physical altercation with my father in one of my cocaine-laced drunken stupors. I said so many horrible things to him during this fight and I pressed him to say horrible things about my mother by screaming at him as I punched him in the face and kicked him while he was on the ground begging him to tell me what he really thought of her and why he killed her. Suddenly, he couldn’t hold it any longer. He blurted it out.

There it is. I smirked – I was unexpectedly satisfied. All of the hate and rage and disgust I felt for myself for what I had done and for what he had done to my mother was spewing out like venom. It was the poison of unforgiveness that had infected me – it festered and ruptured and now it was exposed.

When I let God step in

God was watching over us that day because suddenly, without warning, invitation or alarm, my brother and my cousin showed up to that trailer in Clanton, Alabama as my father was picking himself up off the floor to throw all of my daughters toys out the door, screaming at me to get out. I had busted his face and broken his glasses. I have no idea what would have happened if they had not arrived when they did – in the middle of the night, in the middle of no where, for no apparent reason.

But I let God in. I surrendered my life to the Lord in 2009. Everything changed for me that day yet I had unfinished business with my dad.

My father died on March 7, 2017. As his next of kin, I spent all of the night of March 6 with him in a hospital room in Alabama. I had made the decision to remove the ventilator that was keeping him alive. He had complications from alcoholism and had suffered a stroke. Being able to spend those last moments with him was definitely a grace from God.

I asked for his forgiveness and made sure he knew he was released and forgiven as well. I prayed over him and read Scriptures to him. I left in the morning to come back to Houston. It was in the morning hours of shift change that he decided to transition. Once all life-sustaining support was removed, I believe that the power to live or die was put in his and God’s hands. This was the best decision, the right decision, the decision that gave him the power to live a life of dignity or die with dignity.

He was given the chance to fight. He decided to surrender.

I believe it’s the most courageous thing he ever did. I believe it showed that, even if it was at the end, he had changed. He decided to grab hold of something better, instead of fight for what he had or what he thought he should have. He decided to take hold of what was given to him – eternal life – even though he didn’t deserve it. This was not my daddy’s character. This was a gift from God.

The mercy of God

Just a few months before his death, my brother offered him the gift of eternal life through a relationship with Jesus Christ. He accepted.

The act of surrender is sometimes the most courageous thing a person can do. Though it is perceived as a weakness, it is actually in that moment that God’s grace makes you strong and He is glorified.

My desire was that one day everything that was meant for evil would be used for good and my dad’s life would glorify God. I believe that on that day, at the end of his life and in his death that the glory of God was magnified. Here’s this man who seemingly “didn’t deserve” the love, forgiveness, affection, and honor that was bestowed upon him by his children .But we loved him anyway. We forgave him anyway. We honored him anyway. Unconditionally.

It is in this that God is glorified.

There are no conditions on the command. There are conditions on the promise. The command to honor does not say only if they treat you well, don’t abuse you, don’t abandon you, or never hurt you. Many would say my father didn’t deserve the forgiveness or kindness shown to him. But the same could also be said of me.

How parenting my teen has brought me to my knees