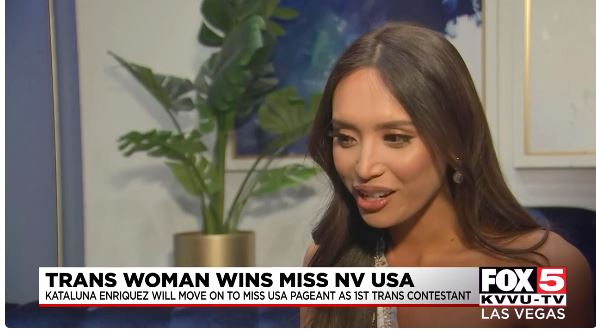 Recently a transgender person named Kataluna Enriquez was crowned Miss Nevada 2021, making him eligible to compete in the Miss USA pageant. He beat out 21 women for the spot. Enriquez described the accomplishment as “making history” and took the opportunity to celebrate his accomplishment while wearing a rainbow-colored gown of his own creation from his fashion line KatalunaKouture.  The fashion line is just one of several professional pursuits Enriquez has undertaken while competing in the pageant circuit.

Enriquez is undoubtedly an accomplished, driven, and hardworking person.  His gowns are beautiful and the designs unique.  I am impressed by his creativity but saddened by his misdirected efforts.    As humans we often tow this line because we were made to be mini creators, but not gods.  Enriquez has unfortunately crossed a line into harming himself in an effort to re-create himself.

Consequently, society is being demanded to support this re-creation.  We are supposed to see Enriquez as an empowered woman, but many of us see a man with gender dysphoria.  We are supposed to be enamored by his glittering gown and physical transformation, but we see a pretty exterior and wonder what help his soul really needs for him to be the man he was created to be?  We cannot watch the pageantry without wanting to talk to the man behind the façade.  As the munchkins said, “Pay no attention to the man behind the curtain!”, but many of us are worried for that man.

Transgender youth often experience comorbidities with their gender dysphoria.  According to a statistic taken by Healio, 66.5% of transgender youth suffer from depression.  33.5% have anxiety, 10.1% have ADHD, and 1.9% have bipolar disorder[1].

Some members of the scientific community will argue that the rate of mental health morbidities decreases after gender affirming procedures, however even articles published by Yale School of Medicine recognize the significant limitations in determining if these morbidities are truly decreasing in the long run, and not just being measured by initial patient reports of feeling better following these procedures.[2]

These statistics are troubling, and yet we are being coerced to believe that gender affirming surgeries and hormonal therapy will solve issues of psychological consequence in patients with gender dysphoria.

We are all broken

Every man, woman, and child has fractures in their being that need healing.  Certain iniquities appeal to us; for some, drinking to excess, for others, gambling.  For some people, gender dysphoria is an issue.  Feeding these iniquities only causes more harm.  A gambler works to stay out of a casino.  An alcoholic finds recovery, often through the concern of their loved ones.

Why would we hold any position but concern for a person suffering from gender dysphoria?  Exacerbating the issue through hormone therapy, social validation, and surgeries will not cure the malady, it will only enable the iniquity and prolong the suffering of the individual.  This is cruelty, not love.

Love – true love – is the answer

Our position towards Kataluna Enriquez should be one of loving concern and a refusal to play into his gender dysphoria.  We can do this by not coming into agreement with the popular position on transgender issues.  Of course, this will not win us many friends, but better to stand in truth than to fall with lies.

Many people are perpetuating the lie that Enriquez can become something he is not, and he is being hurt in the process.  We are called to restore creation, not destroy it.  We cannot come into agreement with destructive beliefs that harm our brothers and sisters.  We must stand firm in truth, even if it costs us friends, reputation, or favor.

Living outside of God’s will only brings restlessness

When we take this task of becoming whole upon ourselves and attempt to accomplish it outside God’s design for mankind, we lose obedience, divine protection and guidance, and holiness.  When we operate outside of God’s design, we inject self-will, harm to ourselves and others, and pride into the world.  We become the ambitious Dr. Frankenstein suffering from a God complex, and we fail to create with science, surgery, hormone therapy, and social affirmation what only God can create by being the Creator of the universe.  As Mary Shelley wrote, “Man,” I cried, “how ignorant art thou in thy pride of wisdom!”.

Kataluna Enriquez can benefit from our prayers, our concern, and our refusal to come into agreement with an ideology that is harmful to him.  I pray he is convicted to discover himself as a unique creation, made specifically male, gifted with creativity, and given a platform where his potential conversion could be an inspiration to others suffering from gender dysphoria.  I pray for his willingness, for humility to overtake him, and for him to be met with loving concern every day.

I know those thoughts Meghan Markle had about suicide