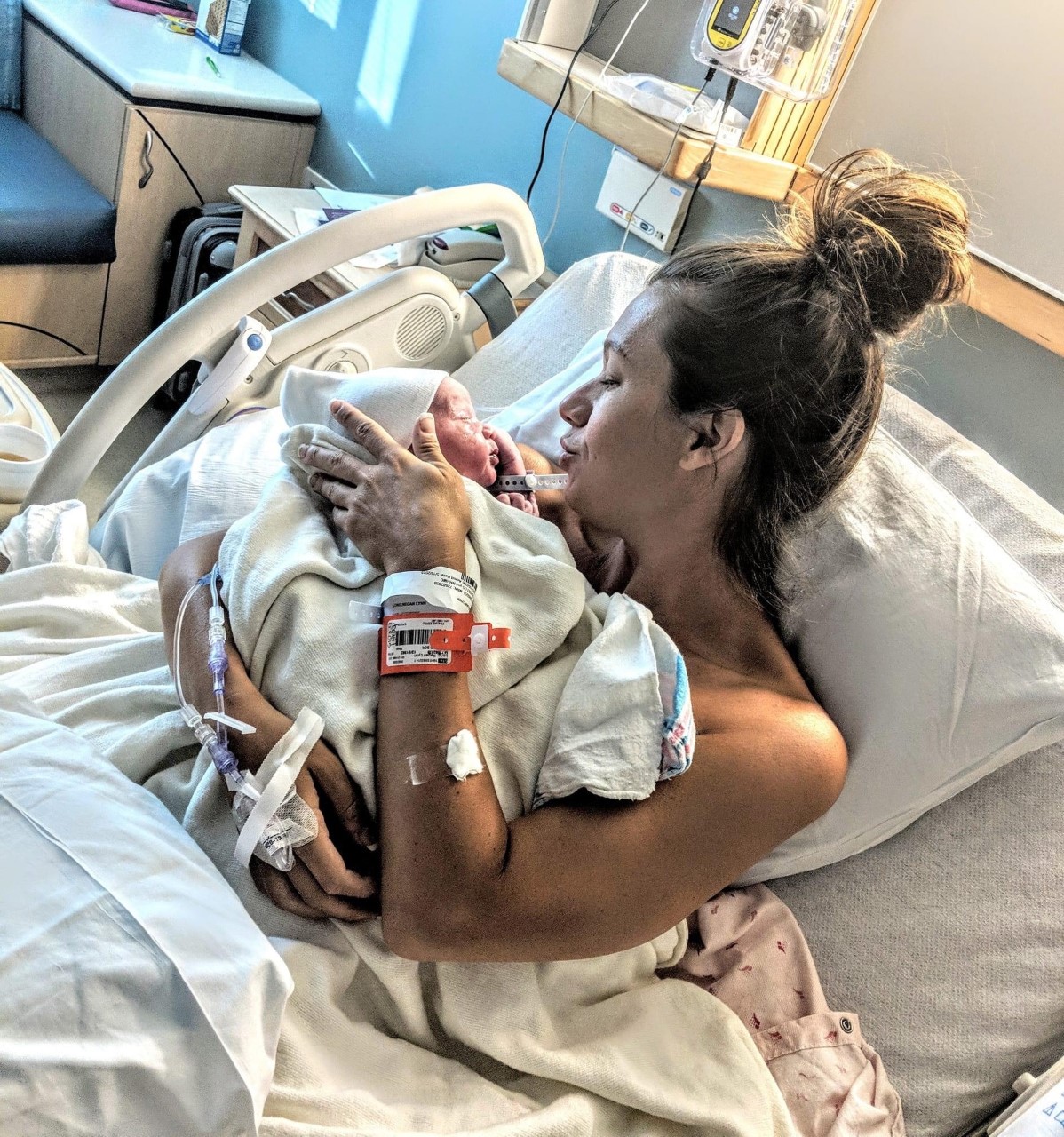 You know that part of labor where you think and actually say aloud, you’re done and can’t do this anymore? I remember announcing to my midwife with my first son that, “I can’t do this.” But you know, I got through all the hard parts, just like us mothers do every single day.

Baby comes, ready or not

She was quickly wheeling me down an emergency room hallway, almost like a dramatic scene from a movie. I was being held in triage room all night by a first day resident; yes, she just clocked in, and I was her first patient.  This was my second baby and this was her first rodeo, and she told me I was only two centimeters dilated and that I wasn’t in labor. However, my screams and the significant pain and contractions every few minutes told me otherwise.

From 1 am to 6 am I moaned and shrieked on and off in pain, rolling back and forth on the small table in the triage room. She finally came to check me shortly after 6 am and when I told her I felt like I had to go to the bathroom and she needed to help me, she slowly backed away with eyes as big as golf balls as she realized she waited too long . She knew something I didn’t: the baby was coming.

My first baby, I had an epidural. I didn’t know what this type of pain and sensation meant, you know, basically that I was crowning. The first day resident had called my midwife at home, and she was out the door on her way to me.

My mind was running rampant at this point, every 30 seconds when I got a break from contractions all I could think about was that I had tested positive for Strep B and needed antibiotics to have a safe vaginal delivery. Not to mention that I needed my epidural to survive this pain and to push the baby out.  I needed, I needed, I needed and I didn’t have anything that was of absolute necessity.

As soon as the midwife arrived she checked me, she looked at the nurse and said, “We’ve got rim. We’ve got to move her now!”

I looked at her worried, and as I was so disoriented by the pain, I had no idea what was happening. “What do you mean? Did I dilate more? How much time do we have? You’ve got to start the antibiotics. I need the epidural. I …”

And she cut me off as she grabbed my hand as she was jogging beside my bed being wheeled down the hallway, “Regan, he’s coming now. There isn’t time for either of those. This wasn’t our plan, but we’re doing it anyways. We have no choice. He’s on his way now.”

I shook my head as tears fell down my face, not accepting what she just told me. “No, no, no. We can’t. I can’t. No, please. You’ve got to …”
Another hand grab and a firm “no” told me that it didn’t matter.
It got really busy, really quick. People rushing in and out of the room. Tools rattling. I remember screaming some unlady-like words. I was scared, almost paralyzed in fear, but it didn’t matter as I was being hastily pushed forward by severe pain as my son was trying to be born.

I don’t take any heroic credit here because I didn’t have any choice. There wasn’t stopping or even pausing the process; there wasn’t even making it any easier at this point. I just pushed with all my strength with massive crocodile tears falling down my cheeks.  I screamed when I had enough strength after I caught my breath in between pushes.

And then when I realized “it”. I was already in the thick of it, I was already smack dab in the very worst part of it. And I felt empowered. I was already presently conquering it.  I was already maneuvering through one of my scariest fears, and yet I was still alive. Barely, but I was alive.

Wouldn’t you know I had him out in three pushes and even more beautiful, wouldn’t you know I had God watching over my little guy the entire time – he was born still in the membrane sac. My water never broke, and he was less than 1% of babies to have been born like this. Because my water never broke, he was being protected while I didn’t even get time to have the antibiotics.

As this last year has been anything but easy, curve ball after curve ball, we find ourselves saying, “I can’t do this. I just can’t …”

But take comfort in knowing you already are – you’re already in the thick of it.

Don’t worry about how you’re going to figure things out or get through this pain – you already are doing it. Every hour of every day, you’re pushing through another contraction and learning to breathe in between.

An Honorable Charge: Motherhood is Nobility

The Day My Son Met Me