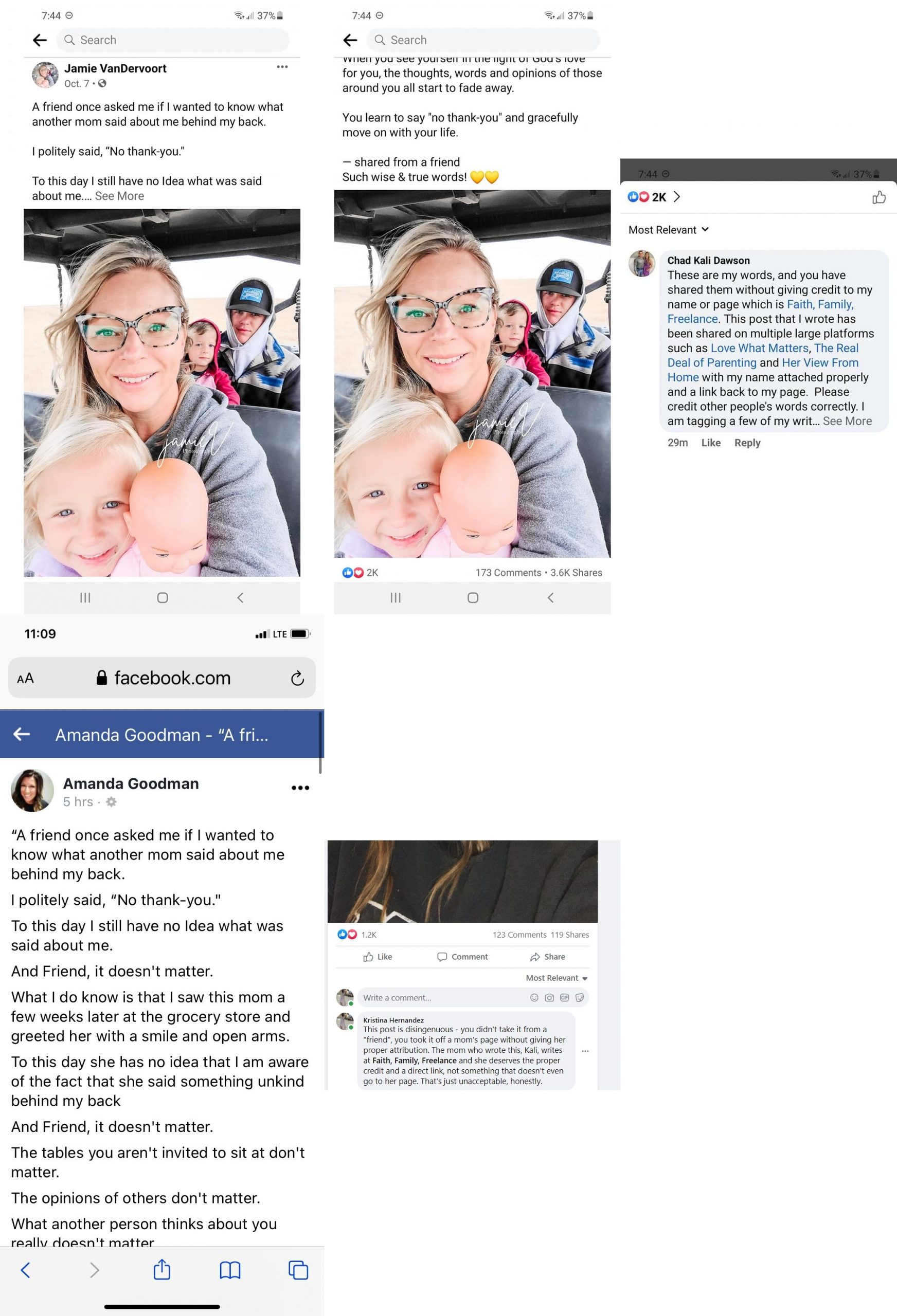 I’ve been a writer for a long time and there are few things that infuriate me more than someone else taking what I’ve written and passing it off as their own. I learned that was wrong way back in first or second grade. It’s called plagiarism in case you’re not aware.

What I write is my intellectual property, as in, I own it unless I give permission to someone else to own it or use it. These things are written into contracts almost all the time when a writer writes for another media outlet besides their own, or on their own private social media page. If you look on websites that post stories, the copyright information is at the bottom of the page. This is standard stuff.

The advent of social media has thrown all of this out the window in many, many cases. I’ve had my words – and photos – copied without permission and passed off as written by someone else. I was livid. I filed reports with Facebook and Instagram (that’s where they put their stolen information) as well as the website they posted my stories to. Facebook, to their credit, did an investigation and removed the stolen content. Learn how to do that here.

Our team of writers and editors spent a good majority of the weekend tracking them down and messaging them, asking to remove the content and/or correctly credit the writer. One of them made the laziest attempt ever at crediting our writer with the @ symbol and the name of her blog, never bothering to actually link it.

We have finally tracked down who we think is the original culprit of claiming Kali’s words as her own and have asked her to remove the content. And, surprise, she hasn’t responded to any of us.

We will be pursuing intellectual property infringement actions against her.

Here is what I think is the worst part of this whole plagiarism thing: all of the people who stole Kali’s words are moms. The person who stole my words and photos was a mom. These moms are all on the we-moms-need-to-support-each-other bandwagon yet they go and literally steal another mom’s words and pass them off as her own.

What kind of encouragement is that? They are telling other moms that their words are so good that they need to be stolen and not properly accredited. Are they that morally depraved to think we won’t find out and be incensed at their lack of integrity?

These moms who are sharing Kali’s words have enormous social media platforms. Kali’s own Facebook page, Faith, Family, Freelance, is small. So these moms are not only stealing her words but also stopping her own page from growing and reaching more individuals.

They have posted her words as their own and then use their own photo with the post. This is not okay. And saying they didn’t know is a cop out. No, you learn that stealing another person’s words verbatim is plagiarism when you are eight years old.

To these moms who think it’s entirely okay to take another mom’s words and pass it off as their own, shame on you. You are not supporting mothers. You are discouraging them at the very least and at most, stomping on them to get ahead in your own world of social media likes and shares. And that is despicable, infuriating and dead wrong.

I remember those little acts of kindness

God’s Children we will never know

Embracing the Hocus Pocus from a Mom Living in Salem, MA