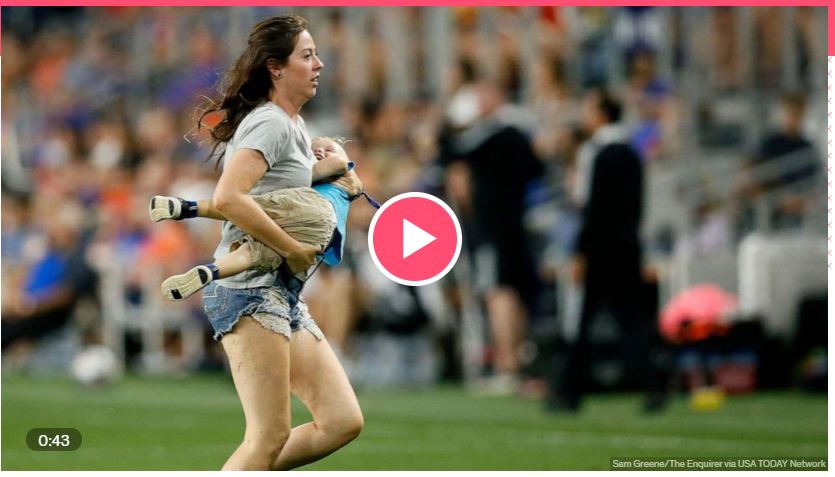 Morgan Tucker, mom to two-year-old Zaydek, is every one of us mothers who have to chase after their toddlers when they go where they aren’t supposed to be. But Morgan’s kid is a little extra, apparently wanting to be a pro soccer player a decade or so too early.

Zaydek sprinted out onto the field last weekend at the Major League Soccer game of FC Cincinnati vs. Orlando City FC in Ohio.

Morgan told Good Morning America what every single one of us moms would have said:

“I literally looked away for one second and saw he was under the fence and I was like, ‘Oh my gosh.'”

We hope this mother and her young pitch invader are having a great day. 😂
pic.twitter.com/hKfwa6wyWI

Then, like the hero she is, Morgan jumped the fence, ran after her kid onto the field while the game was still in play, slide-tackled Zaydek, grabbing him in her arms and running off the field. The game didn’t even stop.

She told GMA that the crowd was cheering for her when she ran out onto the field. The poor mom said she was so embarrassed but really, she’s such a rock star.

Oh, and did we mention Morgan was at the game as a guest of her employer? What a great take-your-kid-to-a-work-function story!

You know why little Zaydek ran onto the field? To no one’s shock who has a toddler, he told his mom he wanted to play with the soccer ball.

He did get the game ball at the end of the day and the whole family walked away with quite the story.

To the Mom Who Cries in the Bathroom

The Real Deal of Fostering: A Taste of Motherhood