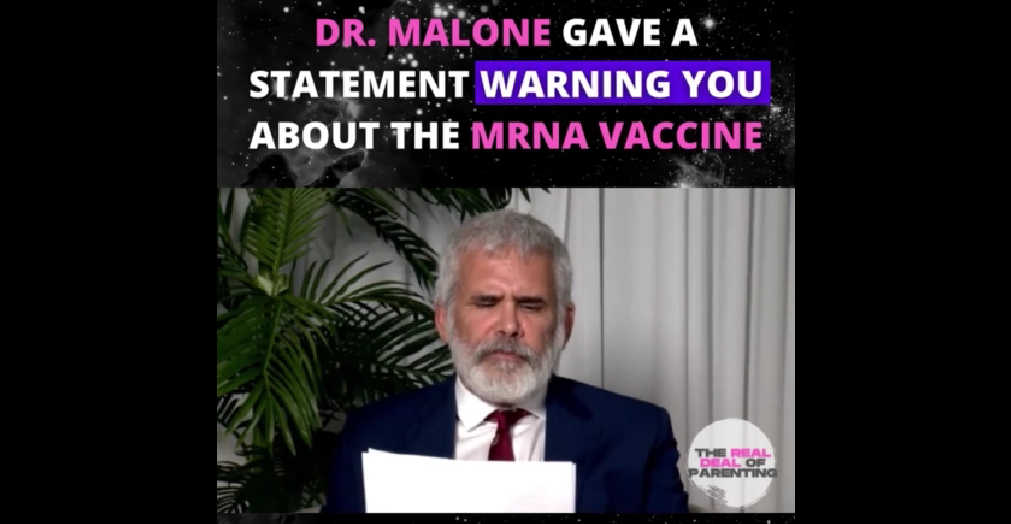 Correct information is hard to come by these days, isn’t it? Which is why hearing directly from the inventor of the mRNA vaccine is even more important. And listening to what he says is of paramount importance when it comes to figuring out what is best for our kids.

Who is Dr. Robert Malone?

Dr. Malone is the “original inventor of the mRNA vaccination” technology and is anything but an anti-vaxxer. His list of accomplishments and education is extensive, as indicated from his own website:

I am an internationally recognized scientist/physician and the original inventor of mRNA vaccination as a technology, DNA vaccination, and multiple non-viral DNA and RNA/mRNA platform delivery technologies. I hold numerous fundamental domestic and foreign patents in the fields of gene delivery, delivery formulations, and vaccines: including for fundamental DNA and RNA/mRNA vaccine technologies.

I have approximately 100 scientific publications with over 12,000 citations of my work (per Google Scholar with an “outstanding” impact factor rating). I have been an invited speaker at over 50 conferences, have chaired numerous conferences and I have sat on or served as chairperson on HHS and DoD committees.  I currently sit as a non-voting member on the NIH ACTIV committee, which is tasked with managing clinical research for a variety of drug and antibody treatments for COVID-19.

What is he saying about the COVID vaccine?

A lot, it turns out:

I used to believe that the FDA, NIH, and CDC were working for the people, not big pharma. I thought that if we could just re-purpose already known, safe drugs for emerging infectious diseases, we could quickly find ways to reduce the death rate.  I thought that drug and vaccine development were regulated by the Federal government for the common good.  What I have learned over the last two years is that regulatory capture of the federal government has warped and shaped the work of Congress and Federal agencies to such an extent that they no longer represent what is in the best interests of the nation, the world, and humanity.  The more I have expressed data-based concerns about what is happening with the vaccines, the US Federal and WHO responses, the more I have been censored, defamed, and subjected to various forms of character assassination by big tech and legacy media. I am not alone in being targeted. Mainstream media has attacked and censored me and other prominent physicians/scientists who do not recite the governmental narrative.  This has been developed into a standard process and deployed worldwide as a technique for suppressing physician dissent – quite literally hunting physicians deemed guilty of thoughtcrimes (such as questioning vaccine safety and effectiveness) or of the “sin” of treating patients with lifesaving drugs in an outpatient setting.

Dr. Malone on the vax and kids

Dr. Malone is adamant that kids do not need, nor should they be forced to get, the COVID vaccine. He says in the video below that the  mRNA vaccines “force your child’s body to make toxic spike proteins”, and these proteins “often cause permanent damage in children’s critical organs. There is no benefit for your children or your family to be vaccinating your children against the small risks of the virus, given the known health risks of the vaccine that as a parent, you and your children may have to live with for the rest of their lives.” The full video is linked here and it’s only a little longer than five minutes.

Social media is actively censoring information about the vaccines. You can share this post via email, text, or messenger. Parents deserve to know the truth about the effects of the vaccine on their kids.

I have COVID: Here’s what is working for me

Obesity is Not Healthy and “Body Positivity” Won’t Change That