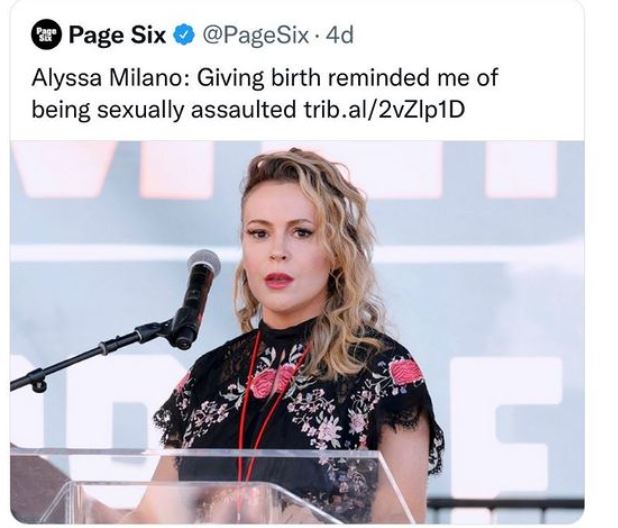 Alyssa Milano is back in the news this week for disparaging comments she made about birth on a People Magazine podcast called “Me Becoming Mom.”

In the interview, Milano, who was been open about being sexually assaulted years ago, discussed her experiences with abortion, miscarriage, and birth.

She told the host: “After going through therapy after giving birth to Milo and remembering that one moment of feeling like I was being held down and had things being done to me that I didn’t want, to me, was very reminiscent of being sexually assaulted. And so it triggered all of these memories that I thought I had dealt with.”

Milano suggested that this birth experience was completely normal and stated that her OBGYN actually said to her, “I could’ve told you this would happen.” Later on, Milano also said she was “so convinced” that every woman experiences postpartum depression and anxiety and that this is also normal.

These statements are personal to me because I became pregnant with my first child when I was gang-raped in 2017. My son is now a happy, healthy 4-year-old, and I look back on his birth fondly. It was a beautiful, mind-blowingly moving event.

That’s why I am compelled to discuss these birth-negative statements made by an actress who is better known today for her frequent attempts to justify abortion than her work on camera.

While we know that the reemergence of any sort of trauma can occur during childbirth – be that trauma from sexual assault/rape, a car accident, domestic violence or other abuse, a previous medical procedure, or any number of things – it is not “normal.”

I was concerned about birth trauma following my rape

Is it something that I was concerned about during my pregnancy with my rape-conceived child? Yes. I actually researched this issue extensively, and I tried to prepare as best I could by going to counseling and working toward healing – two steps all survivors of any sort of abuse need to take.

In addition, I spoke with my own OBGYN ahead of time and had her note in my chart that I was a rape survivor so that medical personnel entering my delivery room would be more aware of my need for them to let me know what they would be doing prior to beginning any cervical dilation checks, et cetera.

Again, this should be standard practice anyway, and during both of my births, which occurred at two different hospitals, I had nurses who behaved as though it was. (And for the record, the note was not in my chart when my second son was born this year.)

Women also have the option to refuse cervical checks and many other commonplace activities during their births. No woman should feel like they are being “held down” and forced to do anything while giving birth.

Alyssa Milano’s comments did not help other assault victims

That is not normal, and given Milano’s level of interest in women’s health and her notoriety for not being afraid to speak her mind, I’m confused as to why she wouldn’t voice her discomfort and ask for other options if she was so uncomfortable.

In America, all women legally have that option and should not be afraid to speak up.

Milano mentioned none of these truths or pieces of advice, which is what initially caused me to question her intent in the interview. Clearly, she wasn’t trying to help other assault survivors because to do so, she would need to tell them what might help them prepare for an easier birth.

Describing this as a normal post-assault experience also doesn’t ring true for me or for most of the mothers from rape I know personally. It does, however, fit the pro-abortion agenda in a culture that frequently uses cases of rape, which account for less than 1 percent of abortions, as the justification for the thousands of these procedures that occur each year.

Abortion promotion is paramount to these celebrities

We know that experiencing trauma and the body’s many reactions to it are never a normal part of life. And while postpartum depression (PPD) and anxiety may be an issue for a growing number of women, they are also not normal life experiences.

To say that a reemergence of post-traumatic stress disorder (PTSD) is just what happens to rape survivors during childbirth and then further suggest that PPD and anxiety are standard occurrences for all mothers of new babies are both ludicrous assertions.

Milano’s motive is clear to me, particularly given that she was followed by a second podcast guest who used her title as a medical provider to discuss and promote abortion: women should be so scared to given birth that they simply “choose” not to do so.

Rape does not justify abortion

The constant use of rape as a justification for the killing of human beings in the womb is offensive, and the resulting arguments are always chocked full of intellectual fallacies. The fear-mongering surrounding pregnant rape survivors has got to stop.

I’m sick of being told by celebrities who attempt to speak on my behalf that I will forever be a victim and that I must always have horrific experiences in every situation I go through for the remainder of my life. And I’m even more tired of my journey into motherhood being weaponized by those with political agendas.

I became pregnant from gang-rape, and I had a very normal birth without an epidural. I hope anyone who experiences “birth trauma” or PPD will not be fooled into thinking this is “normal” by someone who is paid to be fake on television and that they will seek help from a licensed therapist or counselor.

Seeking help and healing? Now, that is normal.

​Paula was conceived in rape and is the mother of a beautiful son conceived in gang rape. She hails from Memphis, Tennessee. Paula serves as the Executive Director for Hope After Rape Conception, a pro-life non-profit dedicated to assisting mothers from rape and their children. A devoted advocate for her son and all people conceived like him, Paula enjoys speaking at pro-life fundraisers and events to share her testimony of conversion from pro-choice volunteer with Planned Parenthood and a private abortion facility to pro-life activist. She hopes to help change our culture to make abortion unthinkable. She loves doing life with her husband and two little boys.

Here’s what giving birth during the pandemic looked like

How Three Women Made Me a Mom