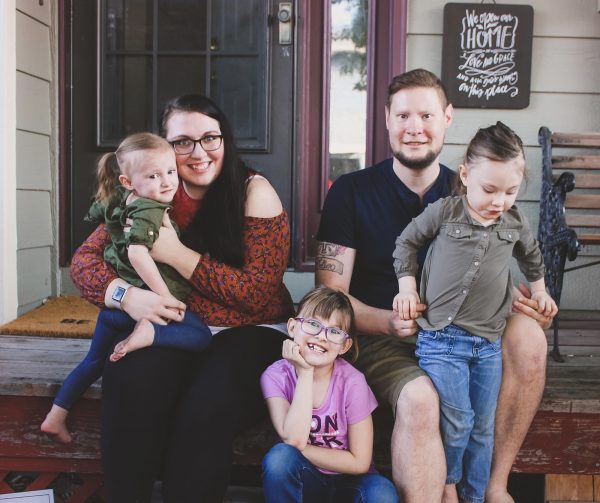 Before I became a Christian and became a #girlmama to three audacious little ladies, I had three abortions at Planned Parenthood. Three abortions before I turned 22. I never thought that would be a part of my story, but God promises to make beauty out of ashes. And He has, and He continues to redeem and restore all of the broken parts of my heart and soul. But, I cannot call myself a Christian, a follower of Jesus Christ, and stay silent any longer. This is a part of my story that God will use to minister to others.

This is a hard story to tell, but I know full well that God is best glorified in the hard stories.

I was eighteen. It was the summer after I graduated high school. The world felt like my oyster, and for a little while there, it was. I had a sweet car, a new lease on life and my future was right around the corner.

But, I had an addiction of the boy-crazy kind. I was head over heels for a guy that was the furthest thing from Prince Charming. I had given up everything for my relationship with him. My grades tanked so bad that I didn’t even graduate on time. I walked the stage at graduation, and donned my cap and gown, but I took my grad photo without a diploma in my hands. It was the most soul-crushing moment of my life.

We were all kinds of wrong for one another, but for some reason, that is alluring as all heck when you are eighteen. Being with the “bad boy” has such an appeal when you are the “goody two-shoes”. I felt like we were Bender and Claire from The Breakfast Club. I envisioned us walking off into the sunset together, fists toward the sky. But that didn’t happen. I’m sure it didn’t happen with Bender and Claire either. We were off again, on again so many times that I wasn’t even sure what we called one another. We were that dreaded “friends with benefits”, and I didn’t realize the game of Russian Roulette I was playing – until I found myself in a Family Planning aisle of my local grocery store, buying a pregnancy test, scared shitless. (Sorry, there just isn’t a “Christian” enough term.)

The next thing I knew, I was banging my head against a bathroom wall, freaking out that there was a plus sign where I was supposed to be seeing a minus. We weren’t even a couple anymore, and here we were: in this weird in-between world of being almost parents and nowhere near married. Neither of us wanted anything to do with one another anymore, and when the first words out of his mouth were “I’ll pay for you to get it taken care of”, I knew we would never ever be getting back together. Dare you to write a song about that, T. Swift.

A couple weeks later, I was walking into a Planned Parenthood. A day before Thanksgiving, and two days before my 19th birthday.

And of course, the protesters I encountered told me that I had already killed a turkey for dinner tomorrow, and I should probably not kill my baby, too. (Not saying they were wrong, but next time, let’s work on delivery) I was hustled into a building with bars on the windows and an armed security guard. Not exactly a warm and inviting atmosphere. Every single person in the waiting room was terrified. We all had pale white faces like we’d just seen a ghost. Each one of us was a walking, talking zombie. I know now why I shut my mind off when I walked in: I wouldn’t have been able to walk into that facility any other way.

There was a momentary time of clarity right before the doctor walked in. I knew what I was doing wasn’t terminating a sack of cells. Sure, I may not have had a full-term baby in there, but he or she was still, a baby. But I was too scared to walk out of the room. I was too afraid of what my life would be like if I walked out without having an abortion. So, I got on the table and put my feet in stirrups and quietly sobbed myself into numbness. I definitely walked out of that clinic a shell of the girl who walked in.

And then it happened again

Two years later, I found myself doing the same walk of shame into a Planned Parenthood. Protesters yelling, same bars on the windows, but a much bigger facility. This one was a multi-level monstrosity that definitely looked more like a prison than a doctor’s office. This time, I had an escort in a neon vest instead of an armed guard. But the entire scenario was the same. The same pale white faces in the waiting room, the momentary glimpse of clarity, and the quiet sobs into numbness. The same kind of guy that made all of the promises in the world but couldn’t deliver on any of them. The same broken-hearted feeling as I walked out a shell of the shell of the girl who walked in.

This time, though, I was of legal drinking age, so I proceeded to get rip-roaring drunk while on heavy narcotics. I didn’t care about the outcome anymore, I was a shell of a shell. I was damaged and broken goods, who would care if I became a full-blown alcoholic to boot? I was so miserable and so jaded, but I convinced myself that all women feel like this after two abortions. I mean, it’s kind of impossible to feel like a moral and responsible person after you do something like that. Imagine how reprehensible and vile you would have to be to do it again. I didn’t have to imagine, unfortunately.

The third time was an absolute secret. I didn’t even tell my mom. I couldn’t tell a soul that I was going through this yet again. The shame and condemnation I would receive this time would surely be enough to do me in. I felt like such a loser, I wasn’t even walking in there a shell anymore. I was just a busted-up bag of bones with a pulse. Yet again, I found myself with my feet in stirrups, but this time, the pain meds didn’t kick in quite as rapidly and I felt everything.

It was the most excruciating thing I had ever experienced, I don’t really remember screaming, but the nurses said I did. I just remember feeling like death in a post-op chair, knowing that I wasn’t going to be hide the pain I was in from everyone. I didn’t know how I could keep such a life-altering secret. I didn’t know how I was even allowed to keep making these mistakes.

There is hope. Don’t forget that.

Hindsight is 20/20, we’ve all heard that. And it’s true, if I knew then what I knew now, I would have been on the side with the “turkey killing” protester, praying that the shell of the girl walking into that clinic would know the truth about what was going to happen to her. But, I know that God wanted me to experience that so that I could share my story with you in the hopes that you choose life. In the hopes that you know your worth in Christ and that you know that He knew you before He formed you in your mother’s womb. You were never just a “sack of cells” to Him and your babies aren’t either. My sweet girls are walking, talking representations of the redemptive power of Jesus Christ. He took my mess, and restored it. He took my mistakes and made them messages. He took my shell of a shell and did a complete metamorphosis.

The main way I found healing through my abortions was through the post-abortive class, Forgiven and Set Free. I was able to receive so much love and healing, not just from the group of ladies I participated with, but from God. I know now that those babies are with Him and I will be reunited with them when I reach Heaven. Prayer and guidance from this class and my sisters in Christ has changed my life for the absolute best.

A God of miracles

He doesn’t want us to condemn ourselves any longer, He has thrown our sins as far as the east is from the west. He doesn’t even think about all the bad things we have done, or will do. He loves us, unconditionally. He cares for us, wholeheartedly. And He is the ultimate plan-maker, when everything seems broken and unplanned.

[Editors Note: If you’ve had abortion or have been impacted by abortion and need help, please go to Support After Abortion]

Here’s what giving birth during the pandemic looked like

I kept my baby…

HUMAN LIFE: The first human-monkey chimera embryos were created – and then destroyed