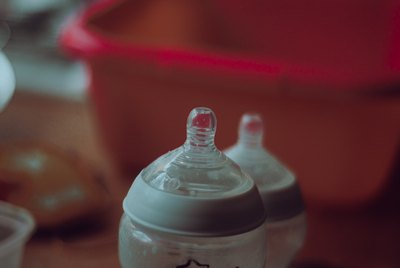 I heard my son’s pediatrician echo those words, but honestly my ears were in disbelief. He was born early and spent almost 2 weeks in the NICU. Of course he was on the smaller side. Does that really mean he was in danger of being labeled “failure to thrive?”

Every three hours around the clock I pumped several ounces of breastmilk. In between pumping I would nurse on one side and collect milk in my Haakaa (hands free breast pump/milk catcher). I saved the milk that I could and would also give my son a bottle an hour after nursing.

Hunter is my second son. I was only able to nurse/pump for my first son, Brian, for 3 weeks until I made the decision to switch him completely to formula. I was determined to make it to at least 3 months with Hunter.

Listening to my body, my son, and the doctors

Hunter and I had a decent nursing/pumping relationship. With additional breastmilk bottles and an occasional formula bottle, I was able to nurse him for five months. He was still on the smaller side, but he was growing appropriately. However, he always seemed like he was still hungry. I felt like he lived on my breasts. He also had a lot of acid reflux; which meant that a portion of my milk never made it to his stomach for digestion.

Slowly, I weaned him onto formula at five months old until he was one year old. He started gaining more and more weight. He was happier. He was fuller. While, I thought because he was slowly gaining weight during nursing, that he was fine; I was wrong. Formula saved him, just as it had once saved his brother.

My breastmilk just wasn’t fatty enough. No matter how much or what I ate, my milk never had the suitable amount of fat. My son wasn’t starving, but he wasn’t satiated.

Unfortunately, some other mothers and babies aren’t so lucky.

Some mothers and babies don’t have a pediatrician that has the baby’s best interest at heart.
Some mothers feel so much guilt about trying to breast feed, because at every OBGYN visit, every Facebook mom group, and every other commercial/AD says “Breast is best.”

While breastmilk is miraculous, formula was created for a reason. That reason was high infant mortality rates. Infants were dying because they were literally starving to death. Unfortunately, when “breast is best” is on repeat in your head, it’s not hard to think that giving your infant formula is like giving them poison. It’s psychological warfare to mothers.

Stop tearing each other apart

“Failure to thrive” was a warning phrase. It warned and reminded me that my baby needed proper nutrition in order to grow and thrive. It also reminded me that it was OK if that nutrition didn’t come directly from my body. Babies need to be fed. They cannot do that for themselves.

Your guilt of not succeeding at breastfeeding, is nothing compared to the guilt of your baby not thriving or surviving.

Yep, We Are THAT Family

A Lesson from the Football Coach

“What did you accomplish all day, mama?”