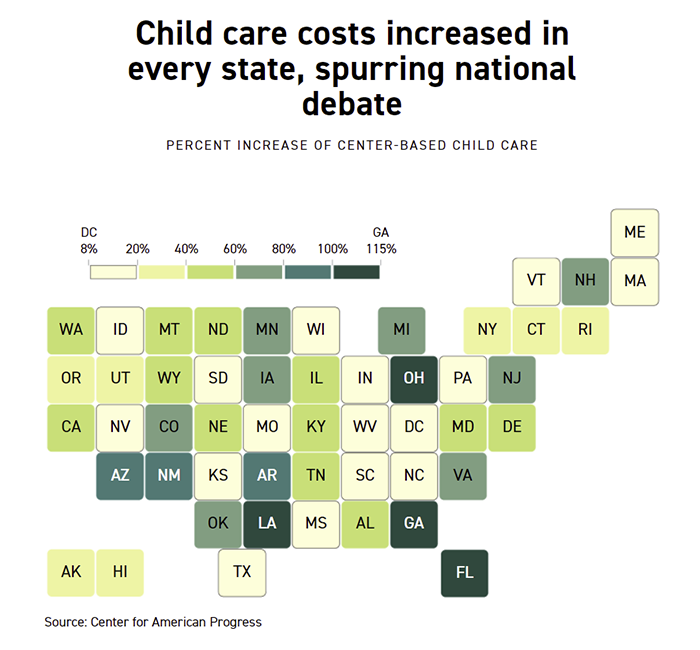 In news to no parents who are paying for childcare, costs to send kids to daycare are soaring throughout the whole country. According to Care.com, the average weekly cost to send one child to daycare is $215 and the average cost to hire a nanny is $525. That comes out to $10,320 a year for daycare and $25,200 for a nanny. These are averages – some areas the cost is a lot more.

The past year though, has seen childcare costs go up to a near unsustainable amount.

Childcare costs through the roof

And those families who made it through are now facing exorbitant increases in childcare costs. The Center for American Progress, a liberal think tank based in Washington, DC, figured out that childcare costs of risen an average of 44% since last year. For comparison, Care.com says that between 2013 and 2019, the average increase per week for an infant in a childcare facility rose 16%.

In Georgia, childcare costs jumped by 115% and Louisiana saw an increase of 111%. You know salaries aren’t keeping pace with these kinds of increases. The pressure families are under right now to make enough money to provide for the basic needs of their families and make sure their kids are well taken care of is enormous.

Why have these costs for childcare soared? The Center for American Progress says that the “increased costs were driven in part by the new health and safety protections for both children and staff.” This would include things like sanitation stations, possibly building renovations for air control, professional sanitization on a frequent basis.

Mothers have been hit the hardest

Mothers in particular have been the hardest by these costs. By April of this year, almost 1.5 million women were missing from the workforce who had previously been employed before the pandemic. Moms who have kids ages five and under were the ones who dropped from the workforce the fastest, according to the US Census Bureau. These are mothers who have poured years into their careers while expanding their families. There is no other option than to quit when childcare costs are through the roof.

What are the childcare costs where you live? How have you navigated this difficult challenge with your family?

One mom’s take on the Netflix series, “Maid”