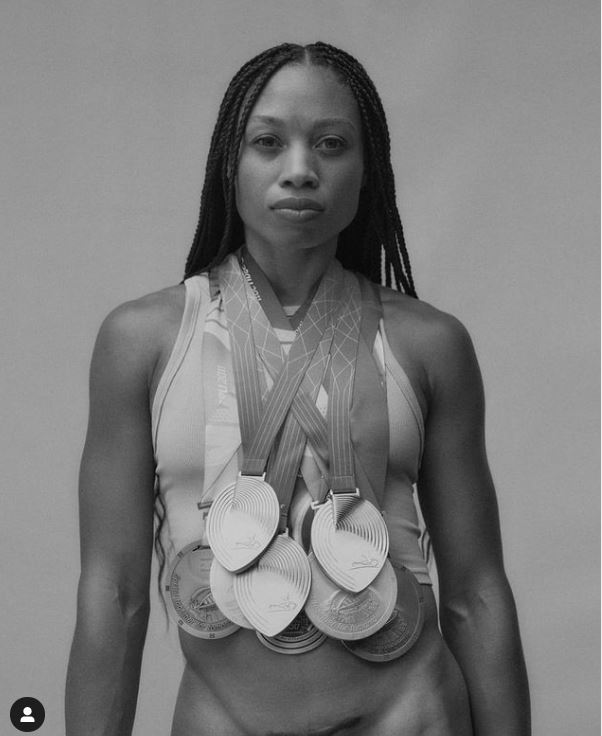 Two years after her very public breakup with Nike over their proposal to pay her 70% less because she was pregnant, Olympian Alyson Felix announced her very own sneaker brand, Saysh – and posted a stunning photo of herself decked out in all her medals with her c-section scar visible.

Can she hear the applause? I hope so.

Allyson Felix is a superstar professional athlete, the most decorated Olympian in U.S. Track & Field history. She just qualified this week for her fifth Olympic trip. This time, she’ll be competing by not only representing her country but also all of us mothers who have dreams of having a career and kids.

She wrote in her bombshell New York Times opinion piece in May of 2019 that she shared the aspirations of many, many women who want to have a career and be a mother:

For most of my life, I was focused on one thing: winning medals. And I was good at it. At 32, I was one of the most decorated athletes in history: a six-time Olympic gold medal winner and an 11-time world champion. But last year, my focus expanded: I wanted to be a professional athlete and a mother. In some ways, that dream was crazy.

It was crazy because she was sponsored by one of the largest sports brands in the world – and it was a man’s world. And Nike refused to guarantee she wouldn’t be punished if she didn’t perform at peak performance in the months after birth.

Moms, can you imagine trying to sprint at full speed mere months after giving birth? It’s suffice to say that wouldn’t happen, or if it did, there would be blood and tears and all kinds of terrible things happening.

Felix ended up having an early C-section due to preeclampsia so there was no way she would be sprinting anytime soon after birth. But Nike really didn’t care. They didn’t care that she was the most decorated track & field athlete – she was pregnant and that was a problem.

This makes me livid. Allyson did all she was contracted to do and in essence, was a great employee. Yet, because she wanted to be a mother and have a career, she was penalized. I have seen this so often, no matter if the woman is a good employee or not. I know I’m not alone either.

In fact, Allyson wasn’t the only female athlete who experienced this kind of discrimmination. After Felix’s oped in the New York Times, other female athletes came out with their own stories of pregnancy discrimmination. There was not only a public outcry over this treatment but also a congressional inquiry. Two months after her oped ran, Nike capitulated and announced that they would guarantee income for their female athletes eighteen months surrounding her pregnancy.

Coming back strong as a mother

After giving birth to a beautiful baby girl, Camryn, Allyson went back to training. But she also decided to start her own shoe company that caters directly to women. Saysh creates athletic shoes specifically for women’s feet as well as offers workout regimes and an online motivation community.

She told InStyle magazine that she created her own company out of her “..experience of feeling overlooked.” She said, “I’ve been asking for change and speaking up, and it just got to a point where I needed to create that myself.”

How relatable is that? So many incredible women have done this – they see a problem without a viable solution and then go fix it themselves. This can even happen in the smallest matters at home to larger ones that affect a multitude of people. I’m always amazed at these women who just go and get things done. I try to remember I have done this in my life also – I think some of us overlook a lot of our small victories.

It’s ok to ask for help

Even Allyson Felix, as a mom and professional woman, acknowledges that our calling is a hard one some days: “Some days, I feel like I’m absolutely killing it on the track and a beast and then coming home and feeling like I’m falling short there, and I think that’s been the constant kind of struggle just realizing that it’s okay not to be okay, and it’s okay to ask for help.”

About that stunning C-section scar photo she posted as part of the promo for her new brand, she reflected that it’s that particular experience of giving life to her daughter that sits above the rest.

“I see the C-section scar as really the metal that I’m most proud of, and the other metals sit on top of that,” she said.

Society is Leaving Struggling Mothers in the Dust

Reaching my breaking point: when will the crazy end?

When Working Mom Guilt Is Real